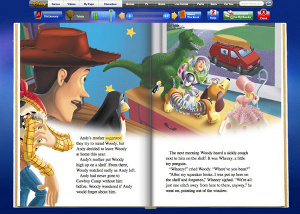 I was one of the first converts to eReaders using Microsoft Reader and their proprietary .lit format. It still works and thanks to a wide variety of free eBooks I’ve accumulated a fairly good library. I also stopped reading newspapers quite a few years ago choosing to get my information online. So, maybe I’m not the most objective person in the world to declare print dead but I think there is a lot of evidence to suggest this form of media is coming to an end.

In this post I’m not going to try to prove that print media is dying by quoting a ton of statistics or convincing you with my irrefutable logic but simply look at what having media available in a digital format will mean for our lives.

One important point is that reading a book or a magazine on paper isn’t fundamentally different from reading it on your reader, tablet, or other device. People will still need to learn how to read and the written word itself is the same regardless of the medium used to deliver it. However, other than this the two experiences are quite different.

Let’s start with childhood. My mother read me books at bedtime from an early age and I don’t think that is going away but there is now the potential for the books to read themselves with audio files, images, and streaming video. We now have monitors in our minivans and airplanes it doesn’t seem much of a stretch to imagine them built into cribs. The media center now holds a vast array of movies and songs but soon it will hold all your books as well. Each monitor around the house has access to the media and thus all your books are at your fingertip at the cradle. I’m sure that plenty of parents don’t want to relinquish control completely to the reader but the screen might display colorful images and sound effects may boom out as you read the story to the baby.

As I grew older, I was reading on my own and my mother would return from the library with a new batch of books for me. The library and your eReader are going to soon become good friends. You’ll be able to check out books from the library simply by downloading them to your computer and from there it will broadcast to any device in wireless range.

The library as we know it will eventually cease to exist because there won’t be a need to store millions of books as they become digitized. This reminds me of the library scene in Rollerball, my all-time favorite movie, which doesn’t paint such a rosy pictures of a world without books. Still, I think this is largely a good thing except perhaps for certain library employees. Not to say there won’t be a library, it will just be fundamentally different than we see today. In the library of the future the librarian will help you find digital versions of the material you want to read.

Your young student will get their text books in digital format and for all of us who got that twenty times handed down copy of school material that was bordering on disgusting this can’t seem like a bad thing. The school backpack industry might need a rethink. This will save schools a huge amount of money in purchasing the material in the first place and it will change the landscape of the textbook industry dramatically. All companies that make their money by printing material on paper and selling it are eventually going to have to find a new way to do business. I think the paper industry will take a major hit as well although the fact that every house has two or three printers might prove me wrong in that regard.

As adults we will no longer subscribe to print newspapers and magazines but simply get them wirelessly each day or week or month on our devices. I’ll be able to read the latest news at any time, anywhere.

A lot of people view this future with trepidation with the idea of mass censorship and book destruction but I see this as a liberating moment. Anyone with an idea can distribute their book without the need for a publishing house, a  printer, a distribution network, and all the other things that were necessary in the past. My own books are published by me, distributed by me, and publicized by me.

That’s going to be the difficult part of the new era of digital print. There’s going to be plenty of good and interesting material out there but there will also be an awful lot of self-published dreck. The consumer is going to have find out what is to their tastes and what is not, rather than being told by the publishing industry. Not that bad a trade-off.

All this media means lots of ideas, lots of books, lots of stories, lots of choices and that can’t be a bad thing. So, don’t fear the new era of digital media, embrace it. Go out and join the digital world today by purchasing an eReader of some kind and buying your first book. If it happens to be The Staff of Naught (only $2.99), all the better! 🙂