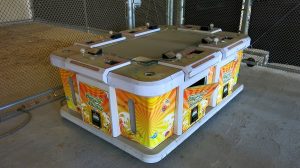 I just read a story about something called Slaphouses in an area of California just outside what is called Little Saigon. It is an area where a number of Vietnamese live having come there during and just after the Vietnam War. Gambling is common in the Vietnamese culture, as it is in almost all cultures.

Gambling is largely illegal in California but, as we all know, making something illegal doesn’t prevent it from happening. In order to serve customers who liked to gamble, a number of Vietnamese coffee shops in the region had video gambling games on the premises. These were setup so that at the flick of a switch the bartender could make them appear to be regular games which didn’t involve gambling.

For some reason the authorities decided to swoop in and shut them all down. Yay! Gambling stopped! Society saved! Right?

Of course not. It doesn’t take much to figure out what happened. People still wanted to gamble. The public places where they could do so were shut down. So people started hosting gambling parties at residential sites. What people? Well, criminals of course. So now we’ve got large gatherings of noisy people in the middle of residential neighborhoods. Of course the neighbors complain. So would I. Of course the criminals running the houses introduce drugs and are happy to charge up stolen credit cards. They have no problem intimidating neighbors or even paying them off. That’s the nature of crime.

So now the police are raiding these gambling houses with guns and dogs. The last line of the article says it all. Westminster police Sgt. Darin Upstill – You shut them down enough times, they’ll be out.

No, sergeant Uphill. No they won’t. They’ll just find another way to do business which will likely, if it doesn’t already, involve corrupting the local police force.

The end result is that instead of allowing people to gamble in a public place in a way that profits legal businesses, we drive the entire thing underground funneling money to criminals. Such laws don’t crack down on crime, they encourage it, they fund it! They alienate the police force from the community they are trying to serve. We see the horrific results of that alienation daily. That alienation results in tragedy for both the community and the fine men and women doing the policing.

Will we never learn? Ever?

Yes, people will gamble away their lives. It’s the price of freedom. Freedom is free, it’s just not safe.

The United States just doesn’t stand for freedom anymore, it doesn’t. It stands for passing as many laws to restrict its citizens as possible with the illusion of safety as the excuse. That’s the opposite of freedom.

I’ve quoted Mr. Benjamin Franklin before and I’ll do it again. Those who would give up essential Liberty, to purchase a little temporary Safety, deserve neither Liberty nor Safety.