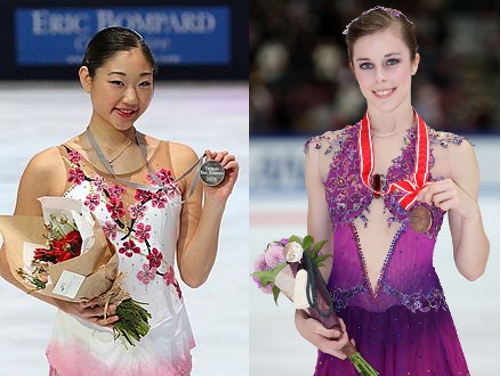 The 2014 winter Olympics in Sochi are fast approaching and many of the US athletes vying to get into the games are entering their final stages of preparation.

The US Olympic Figure Skating Championships, in which no figures are skated, just finished up in Boston and the third place finisher in the Senior ladies side was a young woman named Mirai Nagasu. The Championships are the last big event before the Olympics and generally, but not always, the top three finishers are chosen to represent the team.

I’m not going to go too deeply into a rant here because the reality is that events such as Non-Figure, Figure Skating are judged. Where there is judgment it is difficult to define a quantitative winner. Non-Figure, Figure Skating, Gymnastics, Diving, Ice Dancing, jumping up and down with ribbons and balls, and any number of other Olympic sports are scored in this way. They’ve tried to quantify it by assigning values to particular moves to remove bias and favoritism but there is no way to eliminate such inequity completely in a judged sport.

Even though the media darling Wagner finished in fourth place she was chosen ahead of Nagusa for the Olympic team. The committee in charge of the selections came up with the usual excuses for such a change but it likely comes down to marketability and television ratings. I spoke about the potential demise of wrestling in the Olympics not long ago and before that about the spirit of the Olympics; which ain’t what it used to be.

This particular contretemps which is roiling the Non-Figure, Figure Skating community is so familiar to me that I can’t even get up enough energy to roll my eyes although apparently I can manage to write a blog post.

Is there a point to all this anywhere on the horizon? I suppose.

The thing I love about sport is that the best player or team usually wins. Now, sometimes an official makes a huge error in judgement and changes the outcome but far more often than not there is a battle on the field of a play, and someone wins and someone loses. It is a test of ability and if all sides give it their best effort they can all leave the field with pride. Sure, one team or player lost but if they gave it everything they had, they are a winner.

In sport it doesn’t matter if you’re the huge favorite, if you opponent is an unknown qualifier, you must take the field and beat them. It’s anybody’s game, as they say.

Not so in these heavily judged events. It’s about money, it’s about influence, it’s about popularity on television (money), it’s about how much your friends and family donate to the committee (money).

So, the committee chose not the best skater, but the young woman they thought could generate the most interest. Ho hum. Nothing to see here.

To those who are fans of Non-Figure, Figure Skating I ask one simple question. Why does this incident surprise you?