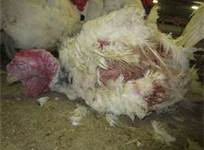 I was, once again, made aware of the sick depths to which government will bend to those who pay the election bills. It’s become a fairly regular occurrence for an Animal Rights Activist group to gain employment at animal husbandry facilities and then take videos of the vicious, vile, sickening torture of animals.

In Iowa the state legislature has responded with House File 589. This bill bans people from taking employment at factory farms under “false pretenses”. Thus, the people who get into the farm and film the vile, sickening, disgusting, horrific, inhuman torture of animal will be put in prison for gaining access under false pretenses. The people who do the abuse, the people who allow it to happen on their property, minimal punishment when they are found out.

I urge you to brace yourself and watch this video.

Butterball is horrified by this abuse and is taking action. Frankly, I’m skeptical. I’m disgusted. I’ve seen a number of these videos now and it kills a little part of my humanity every time.

The Iowa legislature is made up of 42 Democratic Representatives and 59 Republican. 26 Democratic Senators and 24 Republican. The Governor of Iowa, who signs the bills, is Republican Terry Branstad.

They will tell you, with a straight face, this bill is designed to keep vandals off the property of farms. That is a lie. It is designed to prevent animal rights groups from filming the horror of animal abuse. How these politicians look their children in the eye I do not know.

I beg you my Republican and Democrat friends to vote for independents. Vote for people who still have a conscience. Vote with your purchases. Buy your meat from local farmers who treat their animals with dignity.

Insist on legislation that puts 24-hour-a-day cameras on the farm workers. Web cameras are cheap and could easily be put into all factory farms at minimal cost. The video could stream live and activists could watch at no cost to the government. There would be many volunteers. I’d be willing to bet animal activists would install and maintain the cameras for free with no government intervention, no cost to the farms, and no cost to the taxpayers.