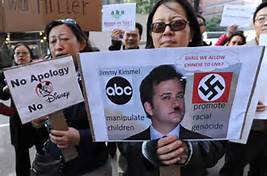 I’m not exactly certain how I missed this earth shattering story but apparently a segment of the Chinese-American community is incensed about what a kid said during a Jimmy Kimmel show.

Kimmel has a Kids’ Table segment where he asks young children questions about serious issues the nation and world face. In this case he asked what the country should do about the $1.3 trillion we owe to China.

One young fellow decided that killing all the Chinese was a reasonable solution. Kimmel tried to suggest that perhaps this wasn’t the best idea but quickly moved on to other suggestions. One young girl argued rather persuasively that if we tried to kill all the Chinese they would try to kill us back and that might not be good. The boy countered with the idea that the Chinese would all be dead by that time so we had nothing to fear. In other words, children lobbing childish ideas. It was all rather humorous, if a bit dark.

In the ensuing outrage Kimmel offered an apology for offending anyone of Asian or Chinese heritage. He expressed the idea that the show merely meant to entertain. That they don’t control or condone what the children say.

This apology apparently did not go over well with as many as 1,500 people protesting outside the ABC studio where his show is produced. Jimmy is accused of teaching kids hatred, promoting genocide, and being a general Hitler like figure in the world. A petition to fire Kimmel was posted on the White House website and has generated a significant number of signatures.

I suppose the idea is that Kimmel should have stopped the segment and gotten into a serious discussion about how genocide against the largest population on earth was not a good idea. He laughed, he told them it was a bad idea, they’re kids. End of story.

A large part of me wants to think the entire protest is actually just an attempt at humor but apparently it is not.

I don’t even know how to respond. Should I try logical arguments about how kids say silly things they don’t mean all the time? That kids often say illogical and ridiculous things. Should I point out that Kimmel laughed it off and tried to explain why the idea was bad? Should I tell people being overly sensitive does their various causes no good? Should I try to write a dissertation about humor?

I will make one suggestion and I’ve made it before. I’m of Jewish heritage and history is my favorite subject. I know a thing or two about Hitler and the Nazi party. How in the early 1930’s young German women were paraded around town tied to polls and physically assaulted because they refused to call off engagements to young German Jews. How citizens were beaten and even killed for not giving the Hitler salute during parades. How they rounded up disabled children telling parents the children were being taken to schools where they would be treated with the latest medicine, and then killed them.

My advice, don’t compare Jimmy Kimmel to a Nazi, to Hitler. You don’t win me over.