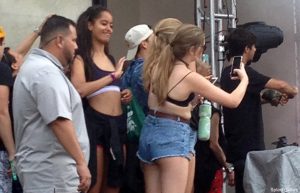 We have a winner. Paula Bolyard from Lifestyle Magazine wrote a hit article about Malia Obama attending the Lollapalooza music festival. The headline writer picked up on the general nastiness in the article and wrote the following headline.

Malia did attend the event and was dancing. She had a shirt tied around her waist and flipped the shirt up so that people could see her shorts. That was the “flashing” part of the story.

Bolyard mentions pointedly at last year’s event some people were arrested and treated by doctors. She specifically mentions cocaine, marijuana, ecstasy, and worst of all alcohol use! Underage drinking at a huge concert? Drugs? Say it isn’t so.

Not that Malia actually flashed anything or took any drugs but we must disparage her as much as possible despite the fact that she did nothing wrong. Bolyard writes in italics to let us know how terrible is the behavior, “… did she ever enjoy the dancing“.

As if enjoying dancing is bad thing. Well, maybe it is in Bolyard’s mind.

If you aren’t ready to be disgusted enough reading this article you might be tempted to go to page 2 where it is revealed that the Obama girls listen to music with bad language in it!

What a piece of garbage article and a disgusting clickbait headline.