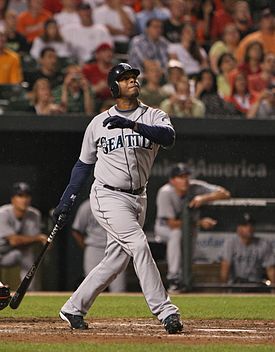 In an era when PEDs were becoming prominent Griffey didn’t use them. The reason I come to this conclusion is that as the years went on his performance declined and his injuries increased. That’s the opposite pattern of players who in advancing years see increases in their performance and recover more quickly from injuries. That pattern of improvement in later years is by far, in my opinion, the strongest indicator of PED use.

Griffey was truly great and had he not suffered a series of injuries or had he chosen to take PEDs he would probably be considered one of the best baseball players of all time along with Babe Ruth and Willie Mays. He was much like Mays with power (630 home runs), speed, and defensive greatness (10 gold gloves). In his first eleven seasons he produced 1,752 hits, 398 home runs, 1,152 RBI, and 167 stolen bases.

The important point for me is that Griffey played in an era when PEDs were being used and, I think, he chose not to use them. When Barry Bonds and Roger Clemens, great players both, decided to become even greater they needed to use PEDs, Griffey Jr. chose to play without them.

When many of his peers were using steroids and other PEDs he gritted his teeth, went out there, and played with whatever his body had left. I think it’s difficult for everyday fans to understand the pressure a professional athlete faces in regards to performance. Imagine if tens of thousands of people watched you do your job every day. Imagine if younger, healthier workers came to your office every spring with the stated intention of taking your job, your livelihood. For a star, for a superstar, for a player just trying to make the team, the temptation to do anything to win, is strong. Especially if you know your main competitors are doing it.

I’m convinced that Barry Bonds turned to human growth hormone (HGH) only when he saw lesser peers exceeding his achievements. Can you imagine watching someone cheat away and get praised for it? Cheat away and make more money than you? Cheat away and maybe take your job?

Head on over to the Baseball Almanac and take a few turns around the hitting categories. See how Griffey Jr. compares to the all time greats and then start removing the PED abusers from the list.

I was lucky enough to be in the park the day he hit homer 500 on Father’s day with his dad there. Here’s to you Junior! From a National League St. Louis Cardinals fan. Thank you for the great memories.

Tom Liberman
Sword and Sorcery fantasy with a Libertarian Twist
Current Release: The Sword of Water ($2.99 for 300 pages of rip-roaring sword and sorcery excitement)
Next Release: The Spear of the Hunt