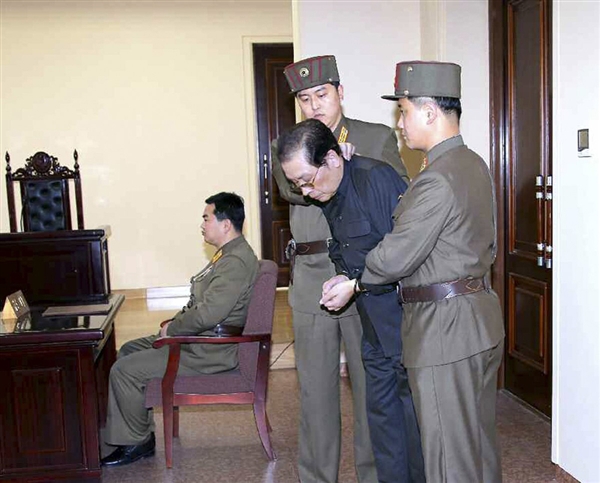 I’ve been following events in North Korea although not particularly closely and came across this story today. My immediate reaction was echoed in the comments below the story and it brought forth some ideas I think worth examining.

I’ll recap for those who have not been watching closely. North Korea is probably the closest thing to a Totalitarian state that exists in the world today. This is a state where the government controls everything from the big to the small. The historical examples of this sort of government include the prominent Fascist states of Nazi Germany and Italy in the late 1920’s through the end of World War II. Stalinist Russia after the war also applies.

This need to control every aspect of life generally leads to horrific persecution of anyone who disagrees with the regime that wields power. Much of the Constitution of the United States attempts to prevent such a government from arising here.

In any case, the situation in North Korea is that the new ruler has consolidated his power by removing one of the most powerful men in the nation. This man was executed along with several of his allies. Other allies are currently serving as ambassadors elsewhere in the world and have been recalled to North Korea.

This recall got me thinking. My immediate reaction was that the diplomats should refuse the recall and stay wherever they are assigned. Several people in the comments thought the same thing although the immediate objection was that those diplomats, if they refused the recall, were sentencing their family and friends to certain death.

It’s true that the family and friends of the diplomats might be executed anyway. Even if the diplomats return to North Korea they might be subject to horrific torture along with their families. However, if they don’t return they are essentially abandoning their family, their friends, and their country.

I started to think about people like Erwin Rommel who was forced to commit suicide so that his family would not be arrested and tortured. I started to think about the way despotic regimes use the concept of honor and loyalty against good men, good women. What choices do we have in life against those who understand what it means to be honorable but who do not make any pretenses of being so themselves?

Anyone who has read my novel the Sword of Water, knows how Jon Gray handled such a situation but perhaps his methods are not always available in real life. I won’t spoil the book, you’ll have to read it yourself, but Jon has a certain style when it comes to things like that.

I’m not even really asking what you would do, just contemplating my own life. My own reaction if faced with such a terrible decision. Abandon your friends and family to certain horrors or go back and face them yourself knowing you probably won’t save your family anyway. What would the remaining years of my life be like if I fled, saved myself? Would I ever be able to forgive myself?

It’s a shame there are people like Kim Jung Un and nations like North Korea. I yearn for a world where people are allowed to simply achieve without strings pulling them. Where we’re not so concerned with everyone else. Where nations and people want what is best for everyone.

I guess that’s all I have to say about that.