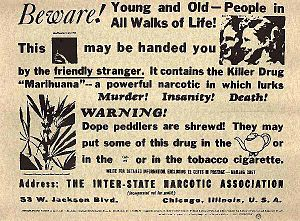 I find one of the most interesting outcomes of the recent election to be the battle between state’s rights and federal authority. Two states brought this issue directly to a head when they voted to make marijuana legal for people over the age of 21. The great states of Colorado and Washington thumbed their nose at the federal government by passing laws making personal use of marijuana legal.

The question the Obama Justice Department must ask itself is if they want to try to fight by enforcing the law without help from the state. It’s an important constitutional question. Eighteen states now make it legal to smoke marijuana with a prescription from a doctor. Until April of 2012 the federal government prosecuted users who obtained marijuana in that way. In that month the Justice Department said they would no longer attempt to prosecute users but would still go after dispensaries. With two states now making it legal for personal use the administration must consider the resources they will devote to this task.

Polls suggest the majority of Americans, 56%, think that marijuana should be legal and regulated in the manner of tobacco and alcohol. That is somewhat tangential to the real question; what will the federal government do?

I don’t know the answer to that question but I’m fairly certain the ultimate result will be that states force the federal government to capitulate. This demonstrates the importance of state’s rights in our republic. As long as the people in each state have the ability to redress an overstepping federal authority then we have a better chance of basic freedom. Now, sometimes people want to nullify what I would consider legitimate federal jurisdiction but that’s the price we pay for having a free nation.

Where the constitution does not speak the rights revert to the states and to the people. Some states and counties might pass laws I don’t like but the right to do so is imperative. As a Libertarian I’m of the strong opinion that the federal government is involved in many areas it does not have the authority to regulate. I hope the states are on their way to redressing this issue without violent revolution in a manner that sees the republic continue.