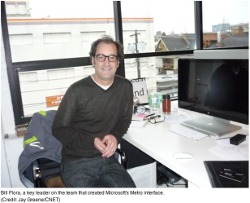 Making the rounds lately all over Facebook, Twitter, and everywhere else is the “fact” that the new Windows Operating System from Microsoft, Metro, was developed on a Macintosh computer. If you do a search on the internet this “fact” is everywhere.

Here’s the real scoop but I’ll sum it up for you and then you tell me if the people passing around the Mac article are guilty of Critical Thinking Failure.

A fellow named Bill Flora worked at Microsoft and was one of the key developers in Windows 8. About a year ago he moved on from this position and started his own company. With Windows Metro being released soon he was the subject of an interview by CNET. In the interview a current picture of him with a Mac computer on his desk ran with the story. Thus, to Apple fans everywhere, Windows 8 was developed on a Mac. Naturally Flora laughs when he hears this bit of nonsense.

Anyway, you tell me, was it a Critical Thinking Fail to pass along this story?