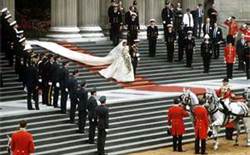 I’ve been leading up to this with my History of Marriage and Keep Government out of Marriage columns and now I’m finally going to take the plunge and weigh in on the highly charged issue of same-sex marriage. Anyone who regularly reads my blog knows my Libertarian tendencies and it will come as no surprise that I don’t think the government; federal, state or local, should have more than a minimal opinion on marriage one way or the other.

Still, government cannot allow anyone to marry because there are legal situations that must be addressed. Certainly everyone acknowledges that children must be protected from ill-intentioned adults. Thus we don’t want twelve-year olds being duped into a disadvantageous marriage. There are mentally ill people who can likewise be fooled for a variety of reasons and I do see a need to protect such groups.

The main arguments against same-sex marriage seem to fall into three categories; Slippery slope, marriage as an institution, and religion. I’ll examine each one.

I’ve never been a big fan of slippery slope arguments. The idea is that to allow same-sex marriage is to open the gates to marriage of brothers to sisters and people to animals. I just don’t see it. Firstly, animals have protection in place already that supposedly prevents their abuse although much goes on anyway. As to incest I’m not really sure I care if first cousins get married and it’s certainly legal in a number of states already. These sorts of laws vary from state to state in any case but I don’t see it changing much if same-sex marriages are allowed.

The institution of marriage is the main argument you hear against same-sex marriage and I sort of see a point here. Marriage is ingrained into society and largely a convention for procreation. People get married to have children. With fewer people having children and marriage rates in general decline I’m just not convinced that allowing same-sex couples to marry is going to hurt an already fading institution. But, if this is the main issue for people it seems relatively simple to allow some sort of civil contract that conveys the legal benefits of marriage without calling it marriage. I completely understand that a spouse has rights to make decisions for a medically impaired partner and why same-sex couples would want similar rights. There are a number of issues of this nature that should be addressed. I would have no problem with granting some sort of civil contract that gave the benefits of marriage in this regard but was called something else.

Finally, there are religious arguments and I think these are the most reasonable. I’m sure that surprises people as I’m an Atheist. However, the Constitution of the United States guarantees religious freedom. Marriage has become, like it or not, a religious institution. While Polygyny remains quite common around the world there is little historical evidence for religiously sanctioned same-sex marriage anywhere. I’m not convinced that the federal government is correct to force a particular state to allow same-sex marriage or that even state government should dictate to each county. We have laws that prevent the purchase of alcohol in counties and I don’t really see why a particular county or state shouldn’t ban same-sex marriage because it is against the will of the majority. No state is required to recognize a marriage created in another state although largely they do. The Constitution is silent on the subject of marriage of any kind and should, as far as I’m concerned, remain so.

Certainly we already see some states banning and others allowing and this is a good thing. This is one of the founding principles of the United States. Where the Constitution is silent the power belongs to the State and to the People.