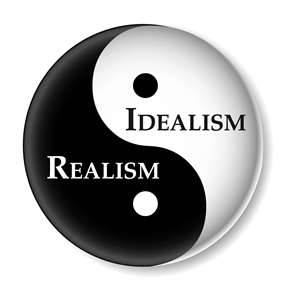 I found myself reading political stories this weekend as President Obama and Mr. Romney begin their campaign in earnest. It’s going to be an ugly few months, particularly for those of us with a Libertarian point of view and our candidate, Mr. Johnson of New Mexico all but shut out of consideration.

One of things I find most disturbing about politics in the United States these days is the over reliance on idealism and the relegation of pragmatism and practicality. Both main camps, and I include even Mr. Johnson although to a lesser degree, rely almost completely on rhetoric, dire predictions, outright threats, and simple-minded idealism.

There are numerous examples of this idealism over pragmatism in our campaigns these days but today I’m going to take on one that is near to the hearts of my Libertarian friends and often seems to ally them with Republican candidates. The idea of personal responsibility or moral responsibility.

The topic in question is eating habits. Whenever I see an article about how Americans are becoming increasingly unhealthy the primary response of Libertarians and Republicans is that people need to take personal responsibility and stop eating. Democrats on the other hand offer legislation to prevent businesses from selling a product that is clearly desired. It’s an interesting case of idealism against practicality.

From an idealistic point of view I couldn’t agree more with my Libertarian and Republican friend in that we are ultimately in charge of our own bodies and that eating ourselves to death is our choice. From the pragmatic point of view I’ve come to the realization that this philosophy is not going to work until we teach Objectivism and Critical Thinking skills to all children and, importantly, this is not on the horizon anytime soon. Furthermore, the increasing unhealthiness of America has a direct and negative effect on me. I pay higher health insurance rates, I have to deal with huge people taking up all the seats, I have to do the work of people medically unable because I’m physically, relatively, fit. I’m not a professional athlete but I go to the gym, try to eat healthy, and am genetically predisposed towards a smaller body type.

So, does that leave me in the camp of Democrats who want to legislate healthiness? In a word, no. First off it doesn’t work and secondly it interferes with my freedom to purchase what I want when I want.

Now comes the problem. What is to be done to solve the general unhealthiness of Americans? Idealism doesn’t work. Legislation doesn’t work. My long-term goal of educating young people about how to think critically is great but no immediate solution and one that I suspect will never be implemented.

So I come to the conclusion of minimalist government intrusion. I see no reason to allow food manufacturers to be deceitful in their practices. I’ve talked about this before but there is nothing wrong with labeling a product to list its contents and the means by which it got to your table. If people want to eat products that result from humane treatment of animals then let that market flourish. Over-regulation kills this idea of course in that anything labeled “Organic” is hardly that thanks to lobbying efforts to change the definition of things.

It’s a difficult tight-rope between over-regulation and no regulation. Information is the key. Make accurate information available to the consumers and then let them drive the capitalistic forces. I’m convinced that people want to be healthy and if given legitimate choices, clearly labeled, they will purchase more expensive products that are healthy, energy-conserving, or otherwise “good”. There will always be a market but convoluted over-regulation muddies the definition of everything while no regulation leads to outright fraud.

Try to get out of the idealistic mode of thinking whether or not you are a Democrat or a Republican. Instead try to come up with practical solution to real problems. Then maybe we can change the world.

Tom Liberman
Sword and Sorcery fantasy with a Libertarian twist
Just Released: The Hammer of Fire