What should be done about government oil policy? That’s the question President Trump and former Vice-President Biden spoke about at the Presidential Debate on October 22 but it’s not really the question at all. We don’t have a Libertarian Candidate in the debates and therefore we only get to hear answers that amount to the same thing. Both Democrats and Republicans are making the same argument.

The problem is Trump and Biden want the same thing; they want a government oil policy that interferes in the natural capitalistic processes. I know, I know, you think your side is completely opposite of the other side but you’re badly mistaken.

Once you admit you want Trump to use the government to support the oil industry or you want Biden to give government aid to renewable energy; you’ve tacitly admitted the government gets a say in the matter at all. If Libertarian Jo Jorgensen had been included in the debate she would, I feel confident, say the only good government oil policy is to stay out of it.

The government; state, federal, and local, should not be giving subsidies to oil or renewables. Imagine if, back in the day, government officials felt the need to protect horses and the industries that support them by suppressing motor vehicles. What if the government poured millions of dollars into candle productions and put up road blocks to electric lights? Where would the United States be as a world power if it had acted in the interests of either?

I wrote a blog about why renewable energy is quickly overtaking coal and oil as the main source of power in the United States but that’s not what I’m writing about today. The message I’d like to convey is when you agree the government has the power to support a particular industry for the good of the nation, you are agreeing with both Trump and Biden. You are, for all practical purposes, making the same argument.

Once you say there can be a government oil policy to influence one of the base structures of modern society, energy, you give it the right to control everything. If you don’t like Trump then you must tell Biden to stop promoting renewable energy. If you fear Biden then you must tell Trump to stop supporting big oil and coal. If you support one, you support both, though you almost certainly imagine you do not. 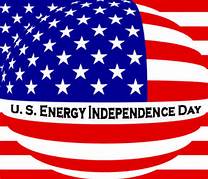