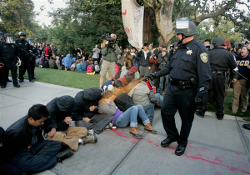 Back in the heady days before I was blogging with WordPress I used Facebook to express my views and I wrote about the officer at the University of California Davis who pepper sprayed a group of protesting citizens. The case has now been settled with each of the students receiving about $30,000. The officer in question was fired some time ago.

Here’s what I wrote originally.

For me the worst is the knee jerk lie that they were surrounded and threatened. Why not say, “The officer made an error in judgment, we are going to give him a week without pay, ask him to apologize to the individuals effected, give our officers more training,” etc.

I stand by that comment. The officer was way out of line. We have the right to peaceably assemble in the United States and the original claim that they were surrounded and in danger was a clear fabrication based on videos taken at the time. Now, it’s entirely possible that even if the campus police had acted in the way I describe above that there still would have been lawsuits and a firing. But, I like to think that we could have actually gotten something better than a bit of money and the unhealthy satisfaction of vengeance. Everyone involved might have learned a valuable lesson. Maybe the officer could have become friends with some of the students. I don’t know, the student’s might have gotten to know about the pressures police face every day if only everyone had gotten together and gotten over their hurt feelings and anger.

I would say this to you. The next time somebody behaves in a way that makes you angry don’t respond back with anger. Try to be nice. There’s a limit to that of course. If they continue to bully then they deserve what they get.

Our society, our politicians, our blog commenters fire off angry, hate-filled, vicious attacks against their opponents and we’re becoming a society that doesn’t look for resolution, we look for conflict. We want conflict, we thrive on conflict. This is not good for our country or our society. It’s not easy to be kind when someone says something vicious about you or lies to cover-up something they’ve done. It’s hard, I challenge you to face that challenge and overcome it. If the other person remains belligerent then stronger action may be required. Just hold off on that nasty reply and try some kindness instead.