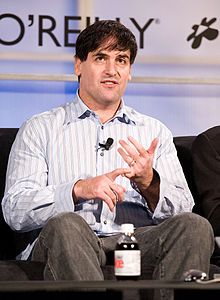 I haven’t posted in a while because I’ve been working on my new novel. There have been a number of juicy stories in the news but the NBA – Mark Cuban – Bracelet story is right in my wheelhouse and I couldn’t resist a quick blog.

Basically the NBA is now in a business arrangement with a company called Power Balance. They make bracelets for athletes that supposedly boost athletic performance. These types of bracelets have been around for a long time and I remember quite well the trend in the golf industry when many people started wearing copper bracelets for their supposed healing powers.

The company in question recently was forced to make a $57 million payment for false advertising and went into bankruptcy. They are now back and partnered with the NBA who is putting pressure on the teams to make them available to their athletes.

Here is where Cuban comes in. For those of you who are not big sports fans, Mark Cuban is the owner of the NBA team the Dallas Mavericks. It’s a good match. Cuban is known for his outspoken attitude and has been fined by the league to the tune of $1.6 million. He’s flamboyant and a bit of a jackass and not one of my favorite people in the world. But, today, sir, Mr. Cuban, I salute you!

A number of scientific studies showed exactly what everyone knows: Benefits of wearing the bracelet are at most a placebo effect. If people want to throw away $40 on the bracelets that’s their business. As a libertarian I think this sort of scam is so transparently phony that anyone taken in gets what they deserve. Even if the company is making false advertising claims people should know better.

That beings said, Mr. Cuban is absolutely right that an organization like the NBA, whose influence stretches far and wide, has no business partnering with such scam artists. It is when we give legitimacy to such endeavors, usually for money, that we allow evil to triumph in the world. When we see things like this we must stand up to our friends, our neighbors, our countrymen and tell them this is a scam. They don’t have to believe us but we, the rational, must speak up!