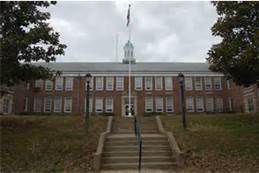 There’s an interesting situation happening in Concord, New Hampshire wherein a woman has been going to the steps of her local high school and praying, quoting the bible, and expressing her religious views out loud every morning as the students enter the school.

Two of her children attend the school and she was prompted to begin the vigil in February when there was a report that some cartridges were found in a school bathroom.

For the sake of clarity a cartridge is made up of a projectile (bullet), the case, the propellant, the rim, and the primer. People often say bullet when they mean cartridge.

There were complaints from students almost immediately and a local atheist group filed a request seeking to see if the woman was granted permission to do what she was doing. The school eventually asked her to stop speaking but continued to allow her to stand on the stairs. With the coming school year they’ve decided to ask her not to return and she has said she will not, although will continue to pray from across the street or at home.

It’s a reasonable resolution as far as I’m concerned but I’m a little interested in what my readers think. When I answered the poll at the site it indicated 68% thought she should be allowed to continue essentially proselytizing on the school steps. A quick perusal of the comments indicated perhaps the opposite, most people thought she should not be allowed to continue. The religious community in Concord is apparently split as well.

From my perspective her behavior is extremely rude and quite possibly a sign of mental illness. People who insist on shouting out their beliefs in a public setting should just shut up and are not infrequently insane. I don’t like blaring musicians after a Cardinals game where I’m forced to walk past them. I don’t like fanatics at the park yelling whatever they want when I’m trying to enjoy a lunch. I don’t like activists chanting on the sidewalk as I drive to work.

The question here isn’t rudeness or sanity though, it is legality. Should anyone, of any religion, or an atheist for that matter, be allowed onto school property to verbally or even non-verbally express their opinions to what is essentially a captive audience? What about a private school? What about your place of business? What about a restaurant?

The First Amendment guarantees us that the government shall not establish a religion nor prohibit the free exercise thereof. Is the woman freely practicing her religion? Does the fact that it is being done on school grounds, which money from our taxes purchased, mean that it is government sponsored? People have the guaranteed right to religious freedom in this country and this means I shouldn’t be forced to listen to your religion when I’m essentially trapped in a public place. At your home, at my home, quietly over dinner at a restaurant, even in a classroom where open debate is allowed and all sides are given equal time, your right to speak outweighs my right to not have to listen. I can largely leave those situations as I desire.

Noise interrupts my privacy and my constitutional rights. When one person is shouting or even talking loudly in a public place it intrudes on a lot of people. The argument that I don’t have to listen is false. If I want to attend that school, I’ve got to walk past  her or go out of my way to another door. She invades my rights, she invades everyone’s rights who has to walk past and I think that outweighs her own rights no matter if a school, sidewalk, restaurant, or any similar public place.

I think it’s an interesting question because both sides have guaranteed rights in this case. It’s a matter of deciding whose take precedent. I think mine do, but that’s probably not a surprise to anyone who reads my blog regularly.

Tom Liberman Sword and Sorcery fantasy with a Libertarian Twist
Current Release: The Sword of Water
Upcoming Release: The Spear of the Hunt