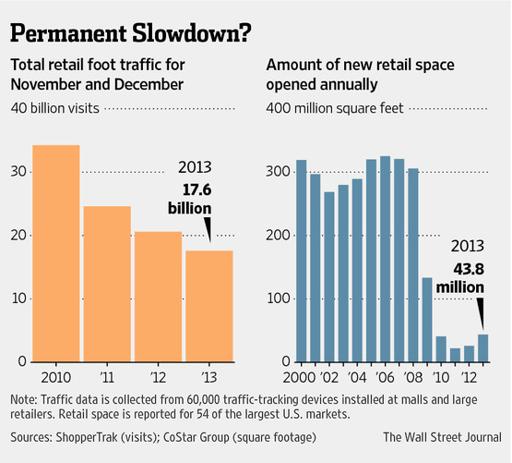 I just finished what I think is a great article about how foot traffic at retail stores is dropping dramatically and how less retail space is opening each year in the United States.

Great news? For the doomsayers it means that Americans have no money and aren’t doing any shopping. I take an entirely different view. Firstly, Americans aren’t going to the store nearly as often because they can do most of their shopping online. That much is pretty obvious and is a trend that has been going on for a number years. The second thing I think it means is that Americans are more wary of going deeply into debt to purchase things.

The most recent economic crisis made us wary, just like it made those who survived the Great Depression big savers. For too long the government has encouraged us, nay, bribed us to spend, spend, spend.

From 1946 to 1973 the US economy grew by an average of 3.8% a year and median household income grew by 2.1% a year. The children of the Great Depression died and their children grew up expecting an expanding economy that would go on forever.

Since 1973 the economy has grown at an average rate of 2.7% a year and median household income has grown by 0.3% per year. Even these number were largely propped up by your tax dollars in the form of “Stimulus”. It started under President Reagan, the Democratically controlled House, and a Senate controlled by Republicans from 1981 to 1987. They managed to triple our national debt trying to stave off economic recession.

It’s been nothing but the same since. Ever increasing national debt in the pursuit of economic growth to match the post World War II era. That’s not my point today. My point today is that it just might be possible that Americans are voluntarily tightening their belts!

I know the naysayers will claim we are still in a depression, the unemployment numbers are higher than they seem. It’s funny, when a republican is President it’s my democrat friends who claim the numbers are rigged but when it’s a democrat in the White House it’s my republican friends who make the exact same argument. Thus you gain a little glimpse into the life of an Independent.

The reality is the numbers are rigged, but they are the same number so they are useful as comparison tools. The equations are largely unchanged, and if they show the economy is growing and the deficit is shrinking, it is doing so in comparison to numbers from previous years.

I can also judge by personal stories of friends in various businesses. Things are going much better, for virtually everyone I know, than they were in four years ago. Not that I think the policies of the democrats or republicans are to be credited or blamed, it’s more of a natural cyclical event.

So, if the economy is growing, certainly not booming, why are retailers not building, why are shoppers not shopping? Online spending is up immensely but not quite enough to cover the losses of the retail brick and mortar stores.

It’s certainly possible I’m wrong and that Americans are not becoming more frugal but it’s undeniable that we’re staying home to do our shopping. This is something I’ve spoken about in before. Read that blog to understand why I think it’s such a great thing, I won’t reiterate here.

So, when I hear fewer shopping malls are opening, when I hear that foot traffic in existing malls is way down, well, it brings a smile to my face. Then again, I’m an introvert. See you online!