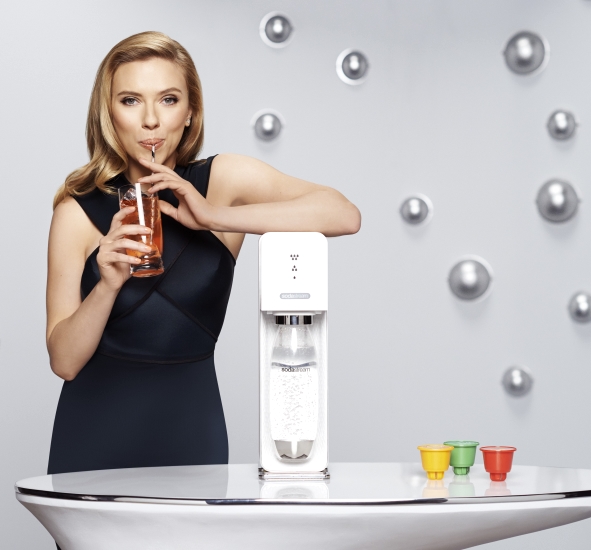 Super Bowl 48 (yes, I wrote 48, not LXVIII) is fast approaching and that means it is time for advertising executives to get their game face on. I suppose the players need to prep as well.

There’s an interesting controversy that gives me the opportunity to write a blog about Scarlett Johansson, football, capitalism, and my libertarian ideology.

Scarlett is doing an advertisement for a company called SodaStream that allows people to make soda in their home from raw ingredients rather than having to purchase finished soda.

There is another controversy over the fact that SodaStream is an Israeli company with a factory in the West Bank but that’s not what I’m going to talk about today. What I want to talk about is a commercial SodaStream planned to run during the Super Bowl in which Scarlett says, “Sorry, Coke and Pepsi“.

This was apparently enough for Fox, who is airing the game, to refuse to the show it. They have told SodaStream to change those words to something that doesn’t mention the two beverage giants by name.

Some countries have laws against comparative advertising but the United States actually encourages it as long as the comparisons are clearly identified, truthful, and non-deceptive.

So what’s the problem? Pepsi and Coca-Cola are both sponsors of the Super Bowl and advertisements shown by both companies are much more aggressive against each other than is this SodaStream advertisement against them. Coca-cola representatives claim they didn’t put any pressure on Fox to refuse to air the commercial.

I suspect it is an effort by someone at the Fox Network to curry favor from Coca-cola and Pepsi. Normally I would say that it’s their network and they have the right to refuse a commercial. I only wish they had censored the Go Daddy, Bar Refaeli kissing scene from Super Bowl 47. I’m eating here!

But this refusal seems to be for no good reason and smacks of censorship, favoritism, and particularly crony capitalism.

Of course, it accomplishes the opposite of what was desired in that it gives SodaStream a huge amount of free publicity and everyone will want to see the original ad.

That being the case, I can’t get overly angry about Fox’s decision but I don’t like it. It’s difficult enough for a small company to take on an Enterprise Business in the world today. If small businesses aren’t even allowed to advertise as they desire, within the realms of legality, then their uphill struggle is even greater.

Competition is good. Suppression of competition is bad. What’s good for our country is the free exercise of capitalism, not Crony Capitalism.