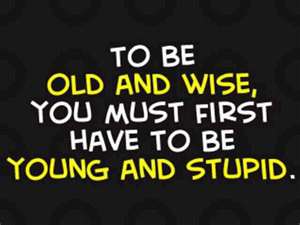 I suppose I must have a different opinion of “stupid” than apparently everyone else in the United States. By the way, I dropped out of the University of Idaho. It seems reasonable to guess that perhaps I’m the stupid one and everyone else is right. But I know better, you idiots! 🙂

Today I’m going to examine the phenomenon of calling people stupid but all next week I’m going to try to define intelligence. It’s a tricky topic but worth an investigation. However, let’s move on to today’s topic: Why we call people stupid when they are objectively intelligent.

When we criticize someone’s intelligence we are basically suggesting that everything they say is likely to be false. It’s much easier to say someone is stupid than it is to examine their words and ideas. Politicians talk … a lot. And when you talk a lot there is inevitably some stupidity that is going to slip out. A lot of times the “stupidity” is merely jumbling word order or getting two facts confused with each other. Sometimes we speak before we’ve completely thought through an argument and say things that later prove inaccurate. It’s normal. We all do it.

However, sometimes we just say stupid things in the heat of the moment. It doesn’t mean we’re stupid, or the political candidate for the other side is stupid. It means we said something stupid. The more we talk, and again politicians talk a lot, the more likely it is that stupid things are going to slip out. Perhaps we need to establish some sort of ratio of stupidity to non-stupidity. I don’t know, I’ll talk about it more later in the week.

The point I’m trying to make here is to not believe that someone is stupid just because you disagree with them. Listen to what they have to say each time they speak and judge that idea on its merits, not on some preconceived notion of the intelligence of the speaker. This is particular true in politics. It is important because the members of both parties have good ideas but the “all or nothing” philosophy that seems to pervade the United States is unhelpful in actually solving issues. We, with our votes, send men and women to Washington D.C. with the sole goal of destroying the other party and without much thought to making the country better.

So, the next time your friend calls President Bush or President Obama stupid I want you to look them in the eye and say, “I actually think [Bush/Obama] is an intelligent man. I disagree with him [sometimes/frequently/usually] but that doesn’t make him stupid.”

It’s up to us voters to change this country and calling each other names didn’t work in 3rd grade and it’s not going to work now.