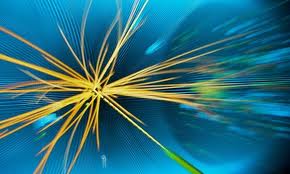 There was some fairly momentous news in the scientific community last week in regards to a sub-atomic particle called the Higgs Boson. It won’t be too difficult for you to find out more about this particle on your own but the purpose of my blog today is to speak to the topic of scientific endeavor and why it is such a good thing.

Lately when I read an article about scientific topics the comments tend to be filled with Luddite remarks about the practical worthlessness of research, generally from Republican based sources, or about how we could better spend the money helping people, generally from Democrat based sources. Not that the criticism is consistently from one side or the other. I just think that these sorts of advancements are crucially more important to society and my life than just about anything else. Yet, it seems, the majority of people in the United States are against funding research of this nature for one reason or another.

First off I will quickly mention something called Particle Accelerators. Not what they do but what damage a failure to appreciate this sort of research did to the United States. Many of the most amazing discoveries, scientific advancements, and great minds of the world are gathering at the Large Hadron Collider in Switzerland. It was built for 7.5 billion Euros (about 5 billion dollars depending on currency exchange rates). Sadly, a much larger collider, the Superconducting Super Collider which was scheduled to be built in the United States was cancelled in 1993. It was estimated it would cost $4.4 billion originally but costs spiraled to $12 billion by the time of cancellation.

Now, spiraling costs and mismanagement are terrible things and good project management is necessary. Congress, with a Democratic majority in both houses and against President Clinton’s advice, cancelled the program in a cost cutting move. For those interested Republicans were solidly for cancelling (about 70%) while democrats were moderately for keeping funding (53%) All the work currently being done in Europe, collecting the great scientific minds of our generation, is being done in Switzerland. Good for the Swiss, not good for the United States.

In our current financial mess other scientific programs, technological advancements, and varied other projects will be lost. The cost of all these losses is incalculable.

But, back to my topic, why is science so good?

Computer science was the main stimulus behind the huge economic boom of the 1980’s. What a few people accomplished brought comfort, profit, jobs, ideas, health, and other things to more people than can be imagined. Abundant, sustainable energy technology will drive huge profits and change the world but a lot of the research is happening outside the US. Not that I’m all gloom and doom. Key players continue to drive the US forward in this field and others. All is certainly not lost.

What disturbs me is the seeming increase in the view that scientific research is a waste of money and time. Just take a second to look around you at what science has provided. The fibers in your clothes, electronics, electricity, computers, your mattress, your vehicle, your eyesight, your health, there really isn’t a moment of your day when science hasn’t brought you comfort and ease. In a representative republic if the people think science is a waste of time so will government officials. And we are headed in that direction.

Sure, some projects don’t work out. And managers need to watch costs to keep things in line. But when we devalue science in the United States we hurt only ourselves.

If you wonder why such a momentous scientific event like the confirmation of the Higgs Boson happened in Switzerland then remember the Superconducting Super Collider. I can’t tell you exactly why confirming the Higgs Boson is so good for you but I know this, it is.