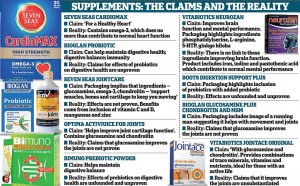 There’s a rather humorous John Oliver video making the rounds on Facebook discussing the largely unregulated supplement industry in conjunction with the appearance of Dr. Oz before the Senate. I wrote about that appearance a week ago and I thought I should revisit the entire subject of the supplement industry from a Libertarian point of view.

It’s a nuanced issue for a Libertarian because as such I think government intrusion into our lives should be kept to a minimum but the government certainly has some duty when it comes to criminal activity. So where do I stand? Should supplements be regulated by the Food and Drug Administration or should the buyer beware?

People can choose what supplements they take and anyone who ingests a supplement without doing a little background check on its medical value deserves what they get. The vast majority of supplements have no health value. I think the scientific community should be running tests to determine if a supplement works. It’s not the job of the government to protect people from themselves. If some people want to believe the outlandish words of Dr. Oz then that’s their fault, not the government.

What completely baffles me is that according to testing at least 33% of supplements have no trace of the items that they are purported to have in them. That’s just fraud. Plain and simple. It’s fraud on a vast scale because every bottle of those supplements that crosses the state line between Illinois and Missouri is a federal crime. Everyone from the owner of the company to the driver who took it across the state line is guilty of millions of counts of fraud and could be sent to prison for the rest of their lives.

Every bottle of supplement that cannot be scientifically shown to do what the advertisement claims it can do is a criminal act. It doesn’t matter if Dr. Oz sells the supplement or not. If he claims it does something while fully aware that scientific evidence says it does not, he’s guilty of a crime. It’s illegal to sell someone a coin claiming it is gold when it is iron. It’s illegal to have a booth where other people sell iron coins as gold when you know they are iron. It’s even illegal to tell people to go to the booth to buy gold when you know it’s iron if doing so benefits you financially. That’s all fraud. You are engaged in defrauding people of their money.

This is a huge point of Libertarians who are often accused of having no compassion. I think the FDA has no business telling a company not to sell a product. If a company says Green Coffee Beans might cause weight loss and people buy them, tough luck. But if a company says Green Coffee Beans will help reduce weight knowing full well there is no scientific evidence they do so, well, forget the FDA, let’s talk about the FBI. You are engaged in interstate commerce fraud. If such laws were enforced we wouldn’t need the FDA to regulate our supplement industry. Put some truck drivers in jail for transporting fraudulent material across state lines and watch how quickly the supplement industry immediately cleans out the bad apples. Why this is not happening mystifies me.

I do think your state legislature or even your municipality has a right to say, hey this supplement is useless, let’s ban it. That is a right reserved for the states and the people just as they can ban alcohol.

We Libertarians are compassionate. We do care about people and this country. We just think that asking the federal government to get involved in areas over which the Constitution gives them no jurisdiction makes things worse, despite the good-intentions of the laws so passed.

There is an item making the rounds on the major news outlets that probably comes as a surprise to many people but is something about which I’ve been aware for many years. Those herbal supplements you’ve been taking … are not what they purport to be.

Researchers tested products from twelve companies and found only two that were listing correct ingredients while the rest were selling “shoddy” product. These companies were putting in cheap and often toxic ingredients instead of the purported herbs in an attempt to increase their profit margin.

These herbal supplements are part of a $5 billion industry, an unregulated industry. People swear by them with the same fervor they swear that copper bracelets alleviate the pain of their arthritis and Power Bracelets boosting athletic performance.

The Food and Drug Administration estimates that there are about 50,000 “adverse events” a year caused by herbal supplements although most are not reported.

The real reason for my blog post is not to lambaste those who believe herbal supplements are healthy but to address what is certain to become a call for the government to regulate this “out-of-control” industry. The FDA already oversees a great deal but because these herbal supplements don’t fit into either the food or the drug category they have thus far escaped supervision. With this new data there are sure to be calls for regulation.

I have no issue with holding companies to their word. If a supplement company claims their product is Echinacea then it should be so. If it is not there are legal remedies available to consumers. Local, State, and Federal government can and should hand out fines. What I don’t see as being helpful is the government stepping in to tell supplement companies how to make their product.

Anyone who doesn’t realize there is a potential problem with the supplements they purchase simply hasn’t bothered to do the requisite research. Information is available and readily found on the internet.

I’d like to examine what I think would be the result of government regulation as opposed to vigilant consumer action. The supplement companies would spend money on various political campaign via contributions and lobbyist. The laws that eventually came down from Washington would be designed to benefit the largest of these companies while hindering the smallest.

If, on the other hand, consumers paid attention to the supplements they were putting in their body and only purchased from the two companies that actually did what they claimed they were doing, those two companies would thrive while the shoddy operations failed. That’s capitalism in action and that is good for consumers and business owners who operate ethically.

When the government gets involved we largely end up with the illusion of safety where little actually exists. Organic foods are not organic. They meet the government definition of organic but that has become largely meaningless thanks to lobbyists convincing politicians to pervert the laws.

We live in the burgeoning information age and with it comes the ability to change the world for the better. If you are putting supplements into your body and don’t know the readily available information about the reputation of the provider then I don’t have a lot of sympathy for you.

I don’t much like the way factory farms treat chickens and I buy eggs from sources that have “pastured” animals. That’s my decision to make. If enough people make it then the industry changes. Government regulation is unlikely to bring about such a change.

If the supplement article shocks you then you have recourse, your purchasing habits.