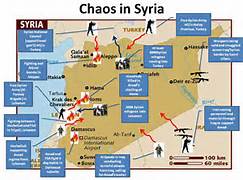 The situation in Syria has been going on for some time now and I’ve avoided writing about it because I’m extremely ambivalent about events.

I’m of one mind that using force against the Syrian government is just another example of U.S. meddling that will eventually backfire. On the other hand it is difficult to know of the horrors inflicted by weapons of mass destruction and just plain old weapons of destruction and not want to intervene. The human suffering is horrific.

As far as the use of chemical weapons of mass destruction the U.S. record is spotty enough that I don’t feel they alone are a justification to intervene. From 1980 to 1988 the Reagan administration allowed and possibly helped Saddam Hussein and Iraq to use such weapons frequently in the war with Iran. Nothing was done because Iraq was our ally at that time.

As far as the murdering of men women and children, we have an extremely spotty record there as well. The Rwanda genocide that occurred under the Clinton Administration, the War in Darfur which took place largely during the George W. Bush administration, and other such events happened without us feeling the need to intervene militarily. On the other hand the Clinton Administration did back Operation Deliberate Force during the wars following the breakup of Yugoslavia.

I guess once we get past much of the political rhetoric and posturing the question becomes: Is it the obligation of the U.S. and other free countries to help people oppressed and murdered by brutal regimes?

But, I’m not done writing yet so bear with me.

I think the U.S. should stand as a beacon of light against those that perpetuate such horrors. I think we made a huge mistake allowing Iraq to use chemical weapons on Iran. That we should have done more in Rwanda, Darfur, the Congo, and other places where such activity happens. I think we should eschew political niceties and help those being oppressed even if they disagree with our politics.

The question then evolves into what I mean by “help”.

Here’s what I mean. Help them help themselves. We’re already aiding the rebels in Syrian and that’s enough. If they can’t win without our direct military support then I must turn a blind eye to their suffering.

It’s hard to say that. It’s difficult to turn that blind eye when you see pictures of brutality. If I thought using direct military force would help, perhaps I’d be of a different mind. Unfortunately our best intentions end up hurting us more often than they help us.

Direct military aid in the form of airstrikes is certainly damaging to the Syrian regime but even the mere threat of such action disperses forces in a way that helps the rebels. Perhaps even more than the strikes themselves. Even if we sent in our brave citizens to fight on the ground would we achieve a satisfactory result? Are we happy with the current state of Iraq and Afghanistan?

The only real success I see in our many adventurers over the last few years was in the former Yugoslavia where our military action was limited and backed by a free people fighting hard for their own nation. That might yet happen in Syria, and Egypt as well, but the more we intervene, the deeper our involvement, the less chance I think it has of occurring.

We’re best offering limited help and letting the people of a country obtain their own hard-fought freedom. Once they do so we should welcome them into the world of nations with open arms, regardless of their political or religious beliefs.