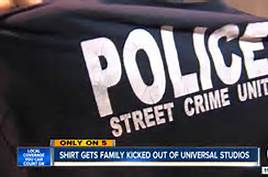 There is another one of those offensive t-shirt stories in the news today and this time I’m with the kickers out and not with the t-shirt wearer. Once we get past the attention grabbing headlines and read the whole story we start to hear both sides of the issue.

What was the offensive slogan? Police: Street Crime Unit

There might be more to this than I’m reading into it and if future revelations prove my original thoughts to be wrong I’ll be happy to rethink my position, as I’ve done before.

Essentially a family was in the Universal Studios theme park in Orlando, Florida and security asked them to leave because of the offending t-shirt. The story goes to great lengths to portray the family as the victims starting with the lead paragraph in which it is declared they were at the park for the sixteenth birthday party of the family daughter.

The family claims they asked to see the policy that referenced the shirt and were refused. They also claim they offered to purchase a different shirt at the nearby clothing store but were not allowed to do so. They were “terrified” at the threat of being arrested by security.

First off, it’s a good policy that Universal has. People who are not official security officers should not be wearing clothes that indicate they are such. In this case the man is not even a police officer; he was supposedly given the shirt by his brother. It’s incredible stupid and potentially dangerous to wear such a shirt at a public event at which you are not a security officer, even if you are a police officer in your day job!

A Universal spokesperson is quoted, near the end of the story, as saying that it is their practice to clearly explain policy decisions with the public. The spokesman welcomed a discussion with the family over events.

In other words, they’ve got multiple witnesses as to what occurred and likely some video footage as well.

In the meantime the family is squawking to every news outlet they can find. The park was kind enough to refund them the money they spent to see a show which they were prevented from attending.

If you haven’t guessed, I’m on the side of Universal in this one. Mistakes can happen but reasonable people generally find reasonable solutions. It almost always takes at least one belligerent party to cause events to spiral out of control. If I had my guess I’m pretty sure I know who was reasonable and who was not in this situation.

I think a casual look at my blog posts will show that I’m not always on the side of security officers and government agencies. There are situations where police officers act like bullies, where security far overstep their bounds (one of my friends was just involved in such an incident). However, when in doubt I generally side with security officials. In this case I’m not even in doubt. Maybe I’m wrong but I don’t think so.

Good on you, Universal. Maybe I’ll take my next vacation at your park, I like the way you do business.