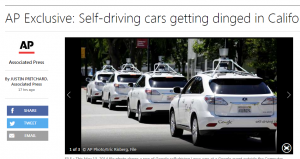 I’m a huge proponent of self-driving cars for many reasons and my trainer at the gym alerted me to the fact that 4 of the 50 self-driving cars in California have been in accidents. The assumption being that they caused the crashes; or at least that’s what the bevy of misleading headlines would have you believe.

The facts you ask. Sure.

All eleven accidents occurred at less than 10 mph and no one was injured badly.

The biggest accident involved a self-driving car being broadsided by another car.

All of the accidents, all of them, involved other cars hitting the self-driving cars, mostly being rear-ended while stopped.

Self-driving cars are required to report all accidents including minor ones where no damage occurs (the majority of the cases here) thus the apparently high number of crashes. Most people never report the sort of accident in which these cars were involved.

Conclusion? Self-driving cars, even in their infancy are doing just fine.