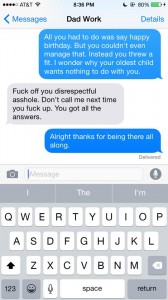 I use Facebook although I don’t have a huge number of friends. I do peruse the links of those friends as I look for fodder for my blog. One of my friends shared the image at the top of this blog. It purportedly shows an exchange between father and child. It might be completely false but it most certainly does illustrate that sometimes parents aren’t very nice.

What struck me about the image was that it spoke rather directly to a topic that I attempt to analyze in my new novel, The Girl in Glass I – Apparition. In that novel the three main characters are teenage girls, Rhia, Mike, and Marianna, who have had very different parental experiences. A fourth character, Adusko also must deal with childhood baggage. It is not simply black and white, good and evil. There are nuances. One of the central themes of the book, and the trilogy as a whole, is the ability to grow outside of that very important parent/child relationship. Eventually the child must be their own entity.

Mike is raised by loving parents in a privileged environment but is in full teenage rebellion. Rhia left her parents at a young age and has set out on her own. Marianna was initially raised by a loving father but his death left her in the hands of an uncaring mother and an abusive step-father. The three set out together to save Tanelorn. One of the ideas of the novels is they get to know one another and learn to escape the patterns set by childhood. Adusko is the product of an extremely violent childhood although his story is explored in more detail in later books.

There is no doubt that we are all children and subject to the environment that our parents or guardians create. A child raised in one way certainly has both advantages and disadvantages in comparison to a child raised differently. There are certain environments that are more likely to create a happy and productive child and others which are more likely to create a monster.

The main point is that despite the worst or best upbringing it is largely possible for a person to make their own lives. In the Girl in Glass trilogy, I spend time with each of the girls showing how they overcome that initial life direction and eventually find their own way.

This lesson is important for everyone. We are none of us perfect. We all make mistakes. We all fall into patterns in life and too frequently they are those set into us at an early age. Those ingrained habits can be for good or ill but it is important to recognize them and eventually choose our own paths.

In the case of the Facebook post the last entry is a sarcastic reference to the lack of parental support. Is that a good thing? A bad thing? It’s not easy to say. Certainly anger is often justified as is sarcasm but if it hurts us to engage in such, should we choose not to do so? If the need to hurt someone else overwhelms the desire to help ourselves, I argue it is a bad thing.

In the end, if we spend our time trying to figure out ways to hurt those who have hurt us, we only perpetuate the lesson they taught us. Their lesson was that hurting others is a way to temporarily abate the self-loathing.

What would be better is if we moved on. Easy to say ….