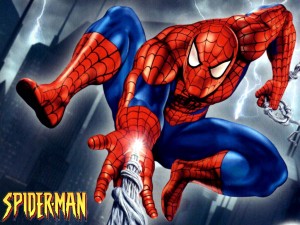 During lunch today we were having one of our typical highly technical, web-development, database intensive discussions when it occurred to us (Mainly Mike and Kerry) that Spider-Man has a hyphen in his name whereas Superman, Wonder Woman, Aquaman, Green Lantern, and others with a similar two-part names do not. What’s up with that?

Search Engines provided the answer quickly enough but what I want to talk about is why a name is important. The reason the topic is interesting to me is that as an author I’m often coming up with names for my characters. I think it’s important to name them appropriately and Stan Lee (who named Spider-Man) seems to think about these things himself. Anytime I can compare myself to the great Stan Lee is a good day for me, although possibly not for Mr. Lee.

When I name a character in my novel Murray Finkelbein it brings forth certain images to mind. There are a number of philosophies about naming characters. It many cases a character is named the opposite of his actual physical traits. Slim Jones might be an obese man. Sometimes a name is meant to more accurately display their traits. Big Ralph might be a large man. A name carries with it certain expectations and for a major character in a novel or comic book, it’s an important consideration.

Stan Lee chose to give Spider-Man his unusual hyphen simply to more clearly distinguish the cover of the comic on the newsstand from that of the very popular Superman. It was a perfectly logical choice and clearly has proven successful. One is not surprised. Mr. Lee has a track record of good judgment in this sort of thing that is undeniable.

My latest novel is currently at the proof-reader and will be out in a few weeks and our discussion about Spider-Man and my subsequent research got me thinking about the names of the character in the upcoming book, The Black Sphere. The book is somewhat of a sequel to the Staff of Naught and thus several of the characters did not require any thought in regards to their names. Ariana, Lousa, Tenebrous, and Shamki were already named. However, one of the other main protagonists, Aydon, was not. Aydon is opposed by his brother Jaylen. I did actually put a fairly significant amount of time thinking about their names.

Truth be told they had different names originally and as the novel progressed I altered them. I don’t know how interesting it will be for my readers, few though they are, but I thought I’d give you some insight into how they were named.

I knew the brothers were going to serve an extremely important role in the novel in that although brought up in the same household they were very different young men. They thought differently about life and this contrast between the two is meant to display my Objectivist and Libertarian ideology. Suffice it to say that I think they are important characters in the novel. Thus getting their names right was important to me.

I wanted their names to be similar but not too close. I ended up with sort of a combination of Aaron and Ryan for Aydon. I thought it was solid without being pretentious. Easy to remember and say. Jaylen went through several permutations (I hope I caught them all in the book). I started with Jaydon but that was too close and might cause confusion, as Stan Lee surmised with Spiderman. Eventually I settled with Jaylen which is also simple but also distinct from Aydon.

No earth shaking revelations with this blog. Just a quick look into the minds of a very successful author and one not so much so: Stan Lee and myself. It’s good to know Stan worries about this sort of thing also.