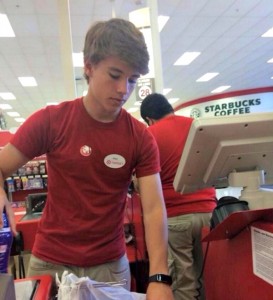 An interesting social media phenomenon swept through twitter when a young employee from Target had his picture posted on Twitter and immediately began to get tens of thousands and now millions of view. #Alexfromtarget is a good-looking young man and these tweets and retweets were largely pushed by a highly desirable marketing demographic called Fangirls. These tween and teen girls tend to be high purchaser and thus attract a great deal of marketing attention.

A Social Media marketing company now claims they were, to some degree, responsible for the explosion of tweets. At this stage there are some doubts about the claim and the company has modified its initial statement. They now say their various employees retweeted the picture of Alex, which was taken and initially posted independently of any marketing ploy, and spread it to likely Fangirl twitter pages. From there the picture gained momentum organically.

The people at Breakr claim it was merely an experiment to see what might be done. I have no way of knowing if what they are saying is accurate but I also have no problem believing that what they claimed happened, could easily happen. We’ve seen the same thing with microcap stocks with what are called Pump and Dump schemes. A social buzz is generated by a company with something to gain and the instantaneous nature of social media takes over from there.

It is clear in this case that Target and Alex knew nothing of the scheme but the implications that stem from this event are intriguing. I’ve known for some time now that a large number of reviews for self-published authors like myself are bought and paid for by the authors themselves. I wrote about this some time ago. It is also well known that companies solicit and repost good reviews for their various products in an attempt to generate sales.

Marketing buzz is highly desirable and can lead to millions of dollars in sales. If a marketing company is adept at generating such buzz then it is clear that businesses will beat a path to their door. How much good publicity has Target received in conjunction with the #AlexFromTarget twitter viral sensation? While it might seem difficult to quantify it is actually a trivial exercise. Target is well aware of their sales from week to week and month to month at various stores. They can now look at the numbers and tell us exactly how much of a boost in revenue that particular store received based on what has happened. It is bound to be significant.

Other companies will look at this increase in revenue and consider generating such viral campaigns. While the Alex from Target event brings such manipulations into the eyes of the mainstream population it is something of which businesses have long since been aware. What makes this story fairly interesting to me is that a third party company picked a tweet not started by the company to publicize. Had Breakr gone to Target with this plan before they implemented it, it is almost certain they could have realized some revenue. In this case it seems to have been an experiment. But what about next time?

Don’t get me wrong. I don’t think Breakr did anything wrong. I don’t think if Target had contracted with Breakr to instigate the viral sensation that anything would have been amiss. It is in a company’s best interest to promote sales. It is in the job description of a marketing agency to create buzz. Alex remains a handsome young man who works at Target. The vast majority of those who fed the viral sensation were not on the payroll of Breakr. They did so willingly.

It does make me consider contracting with Breakr to promote my books!

One thought on “Marketing Power – Alex from Target”