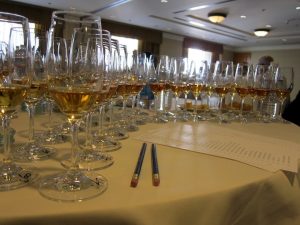 There is a plethora of phony contests in this world and I recently read a story where some rye whiskey I’ve never heard of was declared the Best Whiskey in the World! I was immediately skeptical.

I got even more doubtful when the article mentioned the distillery has been in operation for about seven years. They purchased the winning whiskey from a Canadian wholesaler and “finished” it later. I’m sure it’s a fine whiskey, but it’s not going to win a more rigorous contest.

This story does give us insight into modern marketing techniques.

Basically, what is happening is someone decides to start a contest. San Francisco World Spirits Competition in this case, but there are thousands of them. They send out invitations to spirit manufacturers all over, mainly boutique companies without a large audience. These invitations come with a price. A steep entry price and then tons of additional fees. Now, I’m not certain that’s the case with this particular event but I’d be willing to wager a bottle of Booker’s it is.

There are so many of these competitions out there it’s becoming quite difficult to separate the legitimate ones from the fly-by-night operations.

I’m a novelist. I’ve written a pretty good number of Sword and Sorcery fantasy novels. Not a week goes by that I don’t get some spam in my inbox inviting me to submit one of my novels to some phony competition for only a $200 entry free. If I were to do so I’d undoubtedly win some prize for which I’d have to pay. Then they’d offer to sell me a marketing kit and a medallion that I can use on my website. All for more money.

That’s the way these contests stay in business. They simply collect money from people who are desperate for publicity. Then the winners, and I use that term loosely, of the contest begin following the marketing kit’s advice and write stories they submit to various publications. Inevitably some of them get accepted and you and I end up reading stories about award winning whiskeys that are nothing of the sort.

Hey, more power to them, I suppose. If some company or individual enters a contest like this they are doing it of their own free will. If someone reads an article in which some unknown whiskey from a seven-year-old distillery is declared best in show they deserve what they get if they shell out $500 for a bottle.

It’s all good old fashioned capitalism. People have always been socially conscious. They’ll purchase something based on its reputation rather than its actual quality. There will be those who want to take advantage of this facet of human nature. They’ll package a wholesale whiskey in a fancy bottle with a bunch of fake awards splattered across their website and sell it at a premium price.

The people who drink it will pat themselves on the back for finding such a marvelous whiskey and eagerly pay for another bottle.

The lesson to be learned here, for those of you who care to listen, is that just because someone says something is the best, doesn’t mean it is.

Of course, if you enjoy it, go out and buy a bottle. You don’t have to listen to this old curmudgeon.