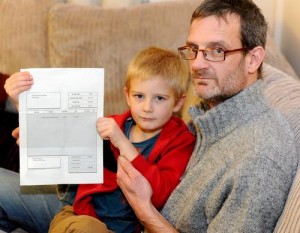 There’s an interesting story making the rounds about a young child who missed a birthday at which his parents confirmed he was attending. The parents of the birthday child then sent an itemized invoice for $24.13 to the Nash’s.

The “experts” are weighing in and I find that I’m not completely in agreement with them. Most sentiment seems to be going towards the parent who was charged for her non-attending child although certainly not all.

It took a while but the email exchanges from the parents are now available, in the story I’ve linked, giving me a better idea of who is blame, mostly.

Young Alex Nash confirmed with his friend that he would be at the party. The party giver confirmed with all attending children’s parents because she needed an exact figure to pay for the ski resort and lunch for each child. Alex, or his parents, decided that he would attend a family function instead and did not show up for the event. Alex’s parents did not call or inform anyone of this decision and claim it was because they had no contact information. Phone numbers were listed on the invitation.

In the exchange of emails Alex’s mother, Tanya, claims later that she didn’t hear Julie (the birthday boy’s mom) trying to stop her at school to talk about the matter but drove off because she had to get her daughter to an after school activity. At one point Tanya claims to not even know what party it was that Alex was supposed to attend. Tanya’s boyfriend apparently went to Julie’s house and told her that she wouldn’t get any money from them. Tanya also tries to argue that it costs more to enter small claims court than the amount supposedly owed.

According to Julie this is not the first such event that Alex has missed.

After reading the various facts of the case I admit that I’m on the invoicing mom’s (Julie) side of this equation. She tried to personally talk with the other party, who drove away claiming not to hear the shouts, before putting together the invoice and sending it Tanya. If you commit to an event which is essentially RSVP you need to go. If you don’t you are costing the other party money. Julie had to lay out money for a child that did not attend. She is not asking for money from the other parents who children did attend. It was her treat for her son’s birthday party.

I even understand the idea of the invoice although it seems impersonal at first glance. It’s actually trying to show the exact amount and how it was incurred rather than just coming up with a figure. After the running away incident I’d have been tempted to do the same.

I’m reminded of a friend’s wedding which I could not attend and I sent an RSVP with attendees of zero. Why? Because someone, probably my mother, taught me properly at some point in life. There are good reasons for RSVP invitations and good manners would have prevented all of this. Manners, they count. Still, I say fork over the money.