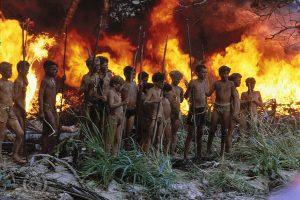 William Golding wrote a book entitled Lord of the Flies which was later made into a movie and remade years later. There is a new movie in the works in which the children stranded on the island will be girls instead of boys. The script is being written by two men. Triggered!

Well, I’m not triggered. I think it’s an interesting idea. However, other people are pretty upset. The three main complaints seem to be that two men cannot possible write the script about girls, the idea the main plot of the boys degenerating from peaceful intentions to violent war wouldn’t happen with girls, they would be peaceful and nice to each other, and the story was about boys and should remain so.

I have sympathy for rage at the fact two men are writing the scripts. There is some merit to the idea men don’t have the personal experience of being a woman and therefore can’t write as good female characters as would a woman. That being said, I think there are plenty of wonderful female characters written by men. Wonder Woman comes to mind but there are many others. Would there be uproar if two women wrote a remake of Lord of the Flies with the original all boy survivors?

The second complaint is baseless. The children stranded on the island in the book and movies are all preadolescent boys. To some degree there is no real difference between boys and girls until sexual maturity. I have a number of friends and they have daughters. I’ve seen preteen and young teen girls in action. If anyone is under the insane delusion they can’t be as vicious and nasty as boys, well, you need to look a little closer. Perhaps the way they carry out their violence is subtler than a group of boys but I think that is interesting fodder for the new movie.

The third argument is likewise nonsense. There is no reason a book that originally had male characters can’t swap them for female characters.

The complaints seem to perpetuate sexist ideologies rather than dispel them. Two men can’t write a screenplay about preadolescent girls is as sexist as saying two women can’t write one about such boys. The third argument is similar to complaints about the 2016 Ghostbusters movie which had an all-female cast.

I’ve got a crazy idea. Let’s wait until the movie comes out and judge it then. Perhaps the two male writers will create a wonderful screenplay. Perhaps it will be awful. Perhaps an island populated by girls won’t end as horrifically as the original. Perhaps they will be worse.
All the judgment going on is sexist, from both sides.

And, by the way, I saw Lord of The Flies as a ten-year-old boy and remain traumatized to this day. I see no reason why ten-year-old girls shouldn’t be likewise disturbed. It’s only fair.