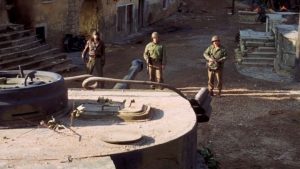 My daily forays to various Internet website brought my attention to a movie I enjoyed years ago called Kelly’s Heroes. At the time I watched it I was probably of a Libertarian mindset but I had not really given much consideration to such ideas. That being the case, I thought a review of Kelly’s Heroes from a Libertarian perspective was in order. Let’s get started.

The movie covers a period of time in late World War II as the Germans are retreating from allied forces. The basic plot involves Private Kelly, portrayed by Clint Eastwood, and his attempt to recover a cache of gold hidden by the German military. He is a private because he was scapegoated for a failed assault taking place before the events of the movie. Here we see of the state punishing the individual for its own failures.

Kelly is bitter over this turn of events and his loyalty has shifted from patriotic support of the war effort to a more self-centered mindset. In this he is joined by supply sergeant Crapgame, played by the great Don Rickles, who is also not particularly interested in winning the war but rather enriching himself. This is a theme we see throughout the movie and includes the cynical captain of the unit.

Several scenes which were cut from the movie show soldiers for both the German and U.S. units spending their time with attractive women and trying their best to enjoy life amidst the horrors forced upon them by the war.

This attitude is best displayed by tank commander Oddball, played effectively by Donald Sutherland. Oddball has little interest in putting his life on the line for his country but the mention of riches quickly garners his attention and he joins Kelly and his band.

On the way, the realities of war are not ignored as several of Kelly’s cohorts are killed in an encounter with German troops.

As Kelly and the others battle their way through German lines to the gold their communications reach allied headquarters where Major General Colt, played by Carrol O’Connor, mistakes their enthusiastic quest for money to actually be fighting spirit. He applauds their efforts and wishes he had more soldiers with this kind of attitude. This directly speaks to Libertarian sensibilities as the quest for personal enrichment, be it money or other endeavors, is what drives people forward. The artificial substitution of patriotism and hatred of another people pales by comparison.

It is certainly true the Nazi threat to the world was great and real but that danger was driven by the same zealous xenophobia that led to the war in the first place. Although the allies and their soldiers were certainly on the “right” side of the war, they and the Germans were on the wrong side of motivational reality.

We see this stark reality when Kelly and the survivors of his band confront a German tank commander at the denouement of their quest. The commander, played by Karl-Otto Alberty, defends the hidden cache simply because he has been ordered to do so. He sees the U.S. soldiers as the enemy.

Kelly and his associates risk their lives to approach the commander and explain the reality of the situation to him. Once he understands what is inside the building, he quickly changes his attitude in exchange for a fair share of the loot.

Then, in what I consider the defining moment of the film, Kelly holds true to his word and allows the German tank crew to leave with their cut, despite the fact Kelly and his associates could easily cut the Germans down without repercussions. They are all people in this world and their loyalty to self-interest far surpasses their patriotism to any contrived state.