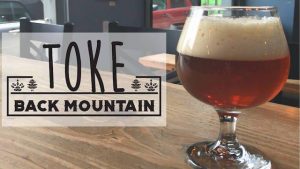 San Francisco establishment Black Hammer Brewery has been ordered by the federal government to stop brewing Toke Back Mountain. Now, many people will look at this as a marijuana-based issue but for me it’s all about freedom and the government overstepping its authority. Toke Back Mountain beer is brewed with a hemp-derived extract known as CBD or Cannabidiol which is not an approved ingredient in beer.

The reason the federal government has a list of approved ingredients is for safety. At least that’s the excuse the government uses to enforce their rules on people just trying to make a living or drink a delightful beer like Toke Back Mountain. For example, on the LD50 scale, caffeine is more toxic than cannabidiol. Caffeine is an approved substance. This fact shatters the façade of reasoning proposed by the government.

I do not understand why the government should list what can and cannot go into beer. I understand putting deadly toxins into food and beverages is a bad idea, I’m just mystified as to how these regulations prevent such behavior. Anyone who did put something horribly toxic into a product would instantly be discovered because people were getting sick. The only brewer that would do such a thing is clearly of criminal intentions or potentially just really stupid. Either way the government regulations don’t protect anybody. I guarantee brewers insert all sorts of things into beers they don’t list, particularly with the huge number of microbreweries all over the United States. Thank you, Jimmy Carter!

People die from food poisoning all the time in the United States and across the world. It is a serious issue but one which government regulations largely do more harm than good. It is painfully apparent to me why the federal government of the United States feels the need to tell every brewer in the country what they can and cannot put into their beer. It doesn’t have to do with safety but with revenue collection and authoritarian control.

I’m not sure exactly what hoops are required to get a substance on the approved list but I guarantee it isn’t cheap. I do know that it costs a great deal of money to get a new flavor approved in the vaping industry. I imagine the brewing industry is the same.

This is the heart of most regulations, revenue generation, not safety. Black Hammer Brewery pays no small amount of money just to be able to serve alcohol legally, liquor license prices vary by municipality. The cost of these licenses and regulations is passed directly onto the consumer. When you buy a beer a fairly significant part of the money is going to government agencies in the form of licenses.

I don’t want to get too far afield from my original topic. The banning of the non-intoxicating substance like CBD is simply government overreach. The federal, state, and local authorities have no legitimate reason to maintain a list of ingredients allowed into beer. This list, and the enforcement therein, costs me money every time I purchase a beer. This is encroachment upon my freedom.

I’m aware it seems trivial and statists argue the government needs to protect us from beer that might make us ill. I disagree and I think it’s not petty at all. We allow this sort of overreach in virtually every aspect of our lives and it makes us less free and less safe.

The free citizens of San Francisco are no longer able to enjoy Toke Back Mountain beer. That makes me sad. And angry.