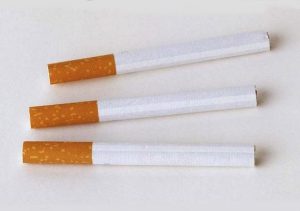 There’s a great story in the New York Times that is a follow up to one they wrote back in February about how the Bureau of Alcohol, Tobacco, Firearms, and Explosives (ATF) used a secret account to pay for all sorts of things.

The articles expose any number of egregious problems in ATF but I’d like to focus on how the account in question was supplied with millions of dollars.

Basically, agents authorized their informants to purchase untaxed cigarettes and sell them at a profit. They then used the revenue generated to fill the account.

It’s really important what’s happening here. The ATF is doing the very thing they are arresting other people for doing. They are doing exactly the thing that resulted in the death of Eric Garner.

The government is breaking the law ostensibly to stop people from breaking the exact same law. The law itself is stupid. If New York decides to put a ridiculously high tax on cigarettes they make it possible for entrepreneurs to bring in product from other states and sell it at a profit. In order to prevent such activity, they create more laws. I’ve written about this stupidity before so I won’t wax poetic here today.

What we’re seeing here is simple market dynamics. The state of New York, and others, created some taxes making certain behavior profitable. The state and federal government then attempted to stop people from doing the profitable thing. Eventually they realized how profitable was the system and began to do the same thing.

That’s natural. That’s capitalism in action. This chain of events is something that needs to be considered every time a legislative body passes a law or institutes a tax.

Unfortunately, this sort of thing happens all the time. Legislators pass new taxes to raise revenue for whatever reason, they pass laws to prevent particular behaviors. This often create criminals. In this case, the very agency tasked with stopping such people.

Think about it. If the tax incentives criminals, what hope does it have of having long term success? Yes, it will raise revenue, that’s true. But how much money is spent enforcing the laws engendered by the tax?

I think it can argued that all we’re really doing is taking money from cigarette smokers to give law enforcement agents work. Work created by the original misguided taxes.

It all could be avoided if we didn’t tax cigarettes so highly. All because we don’t like smokers and don’t mind taking their money.

For the record, I don’t smoke.