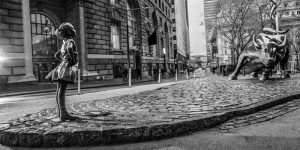 The fight between the Charging Bull and the Fearless Girl just left the park and headed to the courts!

I am the son of a lawyer, the brother of two lawyers, and the cousin of even more lawyers. I find law fascinating and when I read the artist who created the Charging Bull, Arturo Di Modica, plans to file a lawsuit against New York City in regards to the Fearless Girl statue placed nearby, well, I had to learn more. And learn I did!

I suspect Di Modica doesn’t have a case seeing as he installed the Charging Bull as an act of Guerilla Art back in 1989. The police seized it but then replaced it a few blocks away because of its popularity. It has remained there on a temporary permit ever since. The worst-case scenario for the city is likely that Di Modica moves it to a new location, at his expense.

Di Modica is a rather litigious fellow so we will see.

Meanwhile, the statue of a young girl facing down the bull was commissioned, created, and placed by State Street Global Advisors as part of an advertising campaign coinciding with International Women’s Day. This statue is referenced as the Fearless Girl. It was placed legally with a permit for one week. It also proved popular and the temporary permit has been extended in the same way as the Charging Bull’s was.

Another incredibly interesting thing is why Di Modica is planning to involve the courts. It is something called Artistic Integrity. Di Modica believes Fearless Girl changes the integrity of his art. The Charging Bull is meant to symbolize aggressive financial optimism. Fearless Girl staring down the bull seems to change this meaning. Now, at least in the minds of some people, Charging Bull is a symbol of aggressive bullying.

As I mentioned earlier, I don’t think Di Modica has a chance in court, but I still wanted to examine this idea. I’m an artist. I write books. Is it really up to me challenge the meaning one, or many, of my readers choose to assign to events in those books? When Jon Gray tangles with High Priest Amalagaz I certainly intend the scene to have particularly meaning, specific artistic integrity. There is a point to it.

If a reader came to me with a completely difference conclusion, I’d certainly explain what I meant by the scene. That being said, I’d have no legal basis to challenge the right of someone else to believe what they want. Likewise, if Barnes & Noble chose to put my ostensibly Sword and Sorcery Fantasy books on the shelf with Mystery Novels I would have little recourse other than telling them not to sell my books.

I strongly suspect Di Modica is simply drumming up publicity and his threatened lawsuit will eventually go away.

Still, I’m glad he filed it because I learned a lot of things today. I hope you did also.