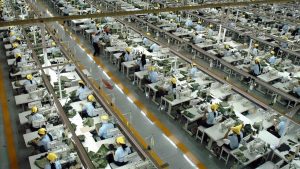 I just read a lengthy but amazingly interesting article describing a firsthand account of working in a Chinese electronics factory, apparently one of the better ones. The account of what happens in the factory and how the workers are treated is an eye-opening experience. It also explains why manufacturing jobs are vanishing in the developed world.

Why so illuminating? Not because it gives the reader an insight into the working conditions of the workers. I have, nor do I think most people have, any illusions about that particular issue. It’s fascinating because it shows, in the starkest possible terms, why such manufacturing is happening in China and other less-developed nations.

There is good, bad, and awful about how these factories operate. I’m not going to go into detail on the various issues. My goal today is to simply explain why such jobs are being performed in China and other countries like them.

It’s really quite simple. In developed countries, we lead amazing and largely wonderful lives. We have access to things people in other countries can only dream about. China and countries like it have a huge and largely disposable workforce. Turnover rates at such factories are enormous. Young people come, work a few months or so to earn enough money to help their families, and then leave.

Suffice it to say that the workers in developed countries would simply refuse to work in such conditions because of our way of life. I’m fairly certain the so-called bad guys here, factory owners, would not want a world in which such factories were possible in the United States.

Consumers drive business. If the United States were China or Mexico as far as the average user’s buying power, well, manufacturers wouldn’t be able to sell their product. They would go bankrupt.

What’s happening is that we have disparity. Wealthy nations have workers who don’t want to do awful jobs whereas poor nations have a plethora of such employees.

The good news is that such jobs, unpleasant as they are, raise the economic profile of countries like China. As the average Chinese citizens gets more wealth then there will be fewer workers to do this sort of work. Automation in the form of robots will continue to take over.

As wealth increases so does quality of life. Eventually the entire world will catch up and there will be no profitable way to exploit workers in this fashion. Not without turning back the clock in way that is detrimental to the super-rich as well as the poor.

This kind of manufacturing job is gone. It won’t be back. And that’s a good thing.

One thought on “Why are Manufacturing Jobs in China?”