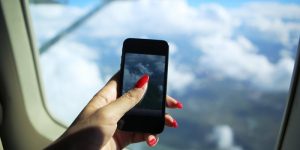 Yep. Not because they pose a threat to communications between pilots and air traffic controllers. Because FCC Chairman Ajit Pai thinks people want some peace and quiet in flight. Pai believes the government has the right to prevent you from using a cell phone because it might disturb someone else.

This is government that Libertarians like myself not only hate, but fear.

If there was a technical reason using your cell phone on a flight was dangerous, I’d fully support the airlines preventing you from doing so. The reason Pai doesn’t mention this as an excuse is because there is little evidence doing so is dangerous.

In a survey, it was found the majority of people don’t really want the person next to them on the plane gabbing away on her or his cell phone. And therefore, the FCC seems to be of the opinion that it should be made illegal. That because people don’t like it, it should be against the law.

I’m certainly not opposed to each airline creating rules about cell phones. If one airline wants to restrict their use during flight then that’s their business. Consumers might flock to that airline for the silence. Other consumers might patronize airlines that allow cell phone use because of the convenience. That’s a free market. That’s the way it should be.

This is an important distinction. When the government is allowed to make things illegal because other people don’t like them we’re treading in dangerous waters. Let’s face facts. We’re not merely treading in such waters. We’re up to our necks with our heads tilted back trying to breathe.

The United States is certainly not a totalitarian regime. We have many freedoms in this country that are not available in places like Russia, Saudi Arabia, and China. I’m grateful for those freedoms but that doesn’t mean we shouldn’t fight against even minor grievances like this one.

The government has no good reason to restrict the use of cell phones on planes. We should not be making laws based on what the majority of people may or may not find annoying. Remember that someone else might very well find something you do to be irritating. When you support government restricting someone else, you inevitably open the door to rules prohibiting you from doing something you would enjoy. Resist such temptations.