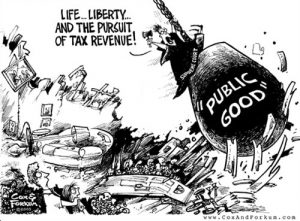 The Border Wall. It’s a fairly big news story. President Trump would like to spend some billions of dollars to build a wall between Mexico and the United States in order to prevent illegal aliens from crossing over. Much of this land is not owned by the government and they would therefore have to purchase it.

It’s quite likely that many of the people who own this land aren’t going to want to sell. The solution is something called Eminent Domain.

In essence, The Federal Government and State Government has the right to simply purchase the land for a fair market price if they deem such Taking arises from a situation of extreme necessity or of public utility. I would think the government is arguing that building the wall is of public utility in this case and therefore they can simply take the land even from unwilling owners.

This, naturally, strikes at the core of my Libertarian ideology. I think cases of Eminent Domain must be severely limited and this particular extension when the argument for public utility is rather debatable does not qualify. There are any number of arguments both for and against a border wall but I don’t want to get into that debate. I simply point out the matter is far from clear, and therefore it cannot be argued with certainty that the border wall is for public utility.

If the government would like to make an offer the land owners can’t refuse, more power to them. Otherwise I think this one has to end up in the courts and that will take years and millions of taxpayer dollars.

Now a quick story about a situation here in my hometown of St. Louis, Missouri. We have a north and south running highway called 170. It was designed to connect two basically east and west highways, 55 and 70. People refused to sell the land required. The government eventually built part of the highway, but the southern section remains unfinished to this day. This is a moderately significant issue when trying to get from the northern half of the city to the southern. It affects me in a negative way on a regular basis.

And yet this is a good thing. It is the course the people of the city took and the state shouldn’t have the ability to take land if the seller is unwilling, barring the rules laid out by Eminent Domain.

Another quick story about the government using Eminent Domain. Keystone Pipeline. The only way to build it was by acquiring land through the use of Eminent Domain, in Texas, Nebraska, South Dakota.

I’m not completely opposed to Eminent Domain because there are situations where all the land for something of clear public utility is purchased except one parcel, and the person is holding out for some exorbitant amount. Even then I’m somewhat skeptical. Eminent Domain is often used by the state to steal land, generally for profit. We should all be wary.