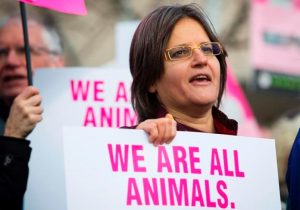 There’s an interesting case about to be adjudicated in Ontario, Canada in which a woman named Anita Krajnc poured water into a truck full of pigs heading to slaughter from Fearmans Pork. She is only charged with a misdemeanor charge of mischief and the case is not exactly earth shattering but it demonstrates a fundamental problem, as I see it, with our general society these days.

What we have is two groups who seem to be, at a cursory glance, at complete and total opposite ends of a spectrum. Krajnc belongs to a group called Toronto Pig Save and Fearmans Pork makes a living off raising and slaughtering pigs.

I don’t think I need to go into details as to why these two groups are facing off in court. Nor do I want to spend time talking about the merits of the case against Krajnc. I won’t extoll on the virtues of the cause nor talk about the value of bringing the pigs to slaughter or even of a free market and supply side economics. All of those things are worth discussing but not by me and not today.

What do I want to talk about? Good question.

What I want to talk about is how people on opposite sides of the spectrum all too often, and as a first response, resort to antagonistic behavior when there is actually common ground upon which they could join.

Common ground? Between Pig Save activists and Fearmans Pork? Yes, indeed. There is far more common ground on a lot of issues than people realize.

Krajnc would like to give the pigs some water while they are in the truck heading to slaughter. That’s a nice sentiment to be honest. Animals heading to slaughter are sometimes not properly cared for near the end of their life because to feed and water them at such a late stage is an expense. It’s cheaper not to do so.

What Krajnc did was climb on the truck and pour water from a bottle onto the pigs. The truck driver and pig owners were naturally worried that something more nefarious is going on and want to protect their property.

A better choice from my perspective would be Toronto Pig Save simply asking Fearmans Pork if they could pay for the expense of giving the pigs one last drink of water before heading to slaughter. When Fearmans Pork found out what Krajnc was up to they could have offered some sort of system by which she was allowed to water the pigs more effectively.

Would this have solved the issue from Toronto Pig Save’s perspective? No, naturally not. They don’t want pigs going to slaughter at all, but at least they could have given the animals some water before the inevitable. Can Fearmans Pork simply have such activists arrested for such behavior? Yes, of course, and they did. But couldn’t they also have suggested a system by which the pigs did get a last drink of water at the expense of Toronto Pig Save?

No solution is going to make everyone happy but it seems to me that we can get more accomplished if we work together, even with those who are apparently on the opposite side of an issue.

What if abortion foes and supporters worked together, spent their time and money, on preventing unwanted pregnancies? What if Animal Activists and Factory Farm owners worked together to improve the life and health of the animals?

How much time, passion, and money is spent on activities that don’t do anything to make the problem better, but simply caress the egos of the parties on both sides. “We’ll put those animal nutcases in prison!” “We’ll show the world the horror of factory farms!”

The comment sections of every story are filled with people who live in this black and white world. My way or no way at all.

I’ll end my post in the same way President Trump often does. However, unlike him; I don’t mean it as in pathetic. I mean it as so much wasted energy, effort, time, and money.