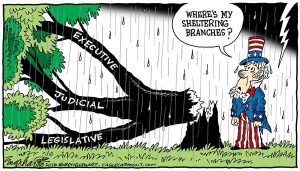 The Constitution of the United States is fairly clear about separation of power between each of the branches of government. In a nutshell: The Legislative Branch makes laws, the Executive Branch enforces laws, and the Judicial Branch interprets laws. The Executive Branch is generally quite limited although, when it comes to issues of national security, these limits are often relaxed. Those limitations, or more specifically, what constitutes national security is my topic today.

Let’s examine foreign treaties to get started. The President of the United States gets to negotiate treatise with foreign powers, including trade agreements. These agreements become binding when the Senate agrees with a two-thirds majority. How these treaties can be broken is somewhat open to interpretation but, by and large, it has been only when Congress agrees to do so.

Likewise, we can take a look at the power to declare war. This is supposedly only the purview of Congress. There are other examples but let’s leave it at that for today.

This all being said; Executive Power is given a great deal of discretion when it comes to matters of national security. If the security of the nation is at risk, the courts have shown the president a great deal of deference in what can be done. This is a problem if the president decides virtually every single issue facing the nation is a matter of national security. This is a dangerous precedent to be setting for any president or any party. It is inevitable that another party or president will eventually come to power and once we’ve decided that trade with Canada, border crossings, gang violence, the price of steel, and who knows what else is a matter of national security; we cede all power to the Executive. The Constitution was written specifically to prevent this sort of behavior.

The question then becomes what defines national security? If we take a broad interpretation it means anything that might pose a threat to some citizens of the nation. A narrow view would be anything that threatens the nation as a whole. The current administration takes a broad view, possibly the widest interpretation in the history of our country. Whenever the Legislative or Judicial Branch does not accede to the wishes of this Executive, the next words we hear are National Security, usually followed by an exclamation point or three.

You can support the current Executive in this fantasy of national security concerns but I suggest to you this way of thinking is extraordinarily short-sighted. Tomorrow is a new day, a new executive. You might regret granting such power.

I have a decidedly narrow take on the idea of national security. I wish you would join me.