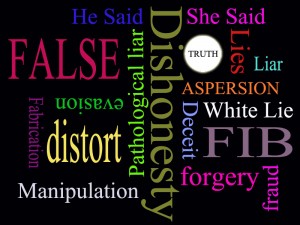 There was an interesting ruling handed down today by U.S. District Judge Timothy S. Black in regards to an Ohio law which prohibited an organization knowingly lying about a candidate during the election process.

The First Amendment protects our freedom of speech. There are certainly laws against slander and libel but there is largely no legal remedy against someone who tells a lie that does not rise to either of those illegal activities. In this case a campaign organization wanted to post an ad that was completely false. The candidate said the organization would be charged with a crime if it did so and the court battle ensued. It is now perfectly acceptable to knowingly lie about a candidate in a campaign advertisement in Ohio.

A similar case was adjudicated by the 8th U.S. Circuit Court of Appeals in a case in Minnesota covering lying about ballot initiatives. In that case the right to lie was also upheld. Neither case has reached the Supreme Court at this junction so, presuming appeals, these decisions might yet be overturned.

I find the case interesting because the people arguing against the laws are basically saying they want to tell lies to help win an election. That by telling lies they should not be subject to legal remedy. They, of course, argue that they are fighting for the First Amendment but the reality is they want to be able to lie in campaigns to swing the election towards their candidate. What they forget, as usual, is that this is dual edged weapon. If they can knowingly tell lies in a campaign advertisement so also can their opponents.

To a certain degree there are already so many lies, so many half-truths, and so much misleading information out there that I’m not sure the judgement really amounts to anything. Anyone who believes attack ads about a candidate without bothering to go to one of the many readily available fact-checking sites probably has no real interest in the truth. They prefer to be fed lies as long as they coincide with their preconceived political ideology.

This just continues the ongoing slide of our nation into a morass of people who don’t really care about the truth. We, the voters, undeniably care only about that which confirms our notions. Anything that disavows them we ignore or convince ourselves are lies. Anything that confirms them is the truth. If the truth were different. If people looked at the facts and judged statements for their true worth we would not have the current elected officials we have. We want to be told lies and proceed to lap them up while begging for more.

My only real surprise in this outcome is that Ohio and Minnesota were allowed to prohibit lying for so long!

To those who “won” this case; I congratulations you on your victory. You will reap your just reward.