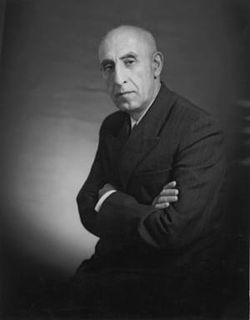 It’s not exactly an earth-shattering admission but the CIA has finally released documents admitting they were largely responsible for the overthrow of Iranian Prime Minister Mohammad Mosaddeq in 1953.

You’re probably wondering why that is such a big deal. 1953 was 60 years ago and wouldn’t seem to have much to do with the world today. I think it is a big deal and there is a large segment of people in the United States who want to make a similar mistake today.

In 1953 Iran was, as they are today, oil rich. The oil companies were largely owned by British interests. Mosaddeq was elected democratically but was unhappy with the fact that British oil companies were getting the vast majority of the revenue. The British Anglo-Iranian Oil Company (BAIOC) offered Saudi Arabia a 50/50 split of revenue but refused to go even this far with Iran.

The government before Mosaddeq toed the line claiming the Iranians weren’t capable of managing the operation. The prime minister was assassinated and Mosaddeq came to power; appointed by the Shah of Iran to appease the people who saw the oil being pumped out of their ground and all the profits from this operation going to England.

Mosaddeq immediately nationalized the oil industry although promised to pay fair compensation from the revenue generated. Royalist Iranians protested this move as Mosaddeq was largely a populist. There was much internal turmoil. Mosaddeq emerged victorious although the British then waged a war of economic ruin on Iran. President Truman opposed the British “rule or ruin” policies but President Eisenhower thought differently. He was worried that Mosaddeq, a fervent anti-socialist, would turn to the Soviet Union for help.

He ordered the orchestration of a coup. CIA operatives paid tribesmen to riot, pretended to be communists and socialist and threatened enemies of Mosaddeq in a clever ruse to make them even more angry at the prime minister. Mosaddeq was removed from power and arrested. He died four years later still under house arrest.

The Shah of Iran then came back into power and was eventually overthrown himself in the 1979 popular revolution.

Is it any wonder the people of Iran were so upset with the United States and England? Imagine foreign operatives roaming the streets of St. Louis paying people to have riots.

When we behave in this fashion we make enemies. When we think we know better how to rule a nation than the people themselves; we go against everything for which our Declaration of Independence and our Constitution stand.

Nations must be free to make their own mistakes. We spend billions of dollars trying to influence nations so we can have military bases, so we can dig up precious resources, so we can put into power those we deem satisfactory. And the world hates us for it.

Iranians hate us for it and their money has spread that hatred everywhere in the world. If only we had looked past the possibility of Iranian oil money, of the Red Scare. If only we had heeded the spirit of George Washington, John Adams, Thomas Jefferson, and the rest of the Founding Fathers. We didn’t and we are paying the price today.

Why is this important now? Egypt.

The people of Egypt overthrew their government and elected a rather nasty lot, the Muslim Brotherhood. That’s their business. The Muslim Brotherhood engaged in some shady practices and the military led a coup against them. In Congress there is a debate about cutting off foreign aid. Using that aid as a bargaining chip to try to further influence the nation and people of Egypt.

We have to stop. Any gain in the short-term is paid for with blood in the long-term.

Freedom is the best form of government in the world. A Representative Republic is as good as it going to get. If we cherish our freedom enough to let other people have theirs they will eventually come to us. Join us.

The way forward in Egypt is clear to me. The Muslim Brother, as nasty as they might be, were elected fairly. When we support a fairly elected government, particularly when it is opposed to our agenda in the region, we make friends. We turn enemies into allies. We make the world a better place.

2 thoughts on “Meddling Confirmed – The CIA and Iran”