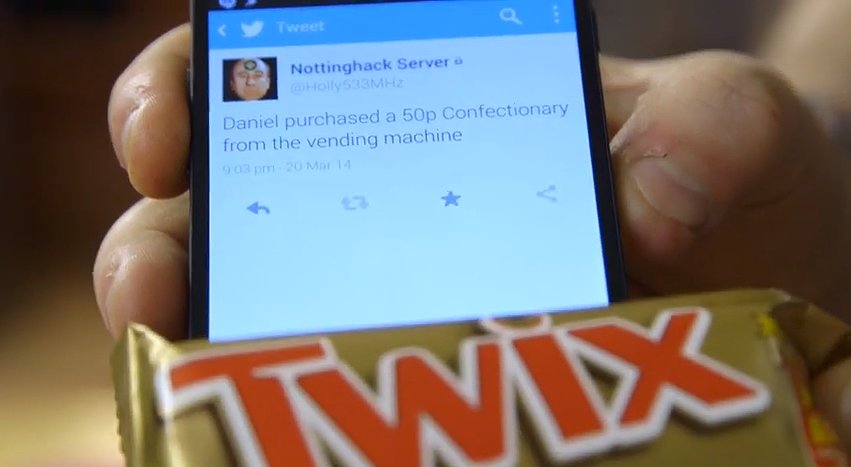 There’s what’s meant to be an light and amusing story making the rounds in the news these days about a hacking group in England that broke into a vending machine and programmed it to tweet messages about who purchased what. In England they have something called an RFID card which when used identifies the name of the person making the purchase.

A lot of comments on the story expressed the idea that it was no one’s business what food they ate and this was an invasion of their privacy.

It’s an interesting privacy issue. I agree that it’s no one’s business what I eat but there is no constitutional protection here in the United States to prevent anyone from watching your purchases and learning your dietary habits. Whenever you use any form of electronic payment there is a real trail of what you have purchased and when.

Even if you use cash to avoid such a trail there are cameras in the stores and the transactions were recorded. Anyone with appropriate rights could access the receipt from the time you were in the line and determine what you purchased. It’s perfectly legal and in many ways quite helpful. If the grocery store knows your purchasing habits they can offer you coupons for the products you use.

It’s a similar situation on the internet when you visit Amazon to purchase my latest novel, The Broken Throne (which I’m sure you’ll be doing right now, yes now, come back and finish the blog later).

When you arrive at Amazon, after you make the purchase, scroll to the bottom of the screen and note that there are a bunch of recommendations. This is because Amazon tracks you when you enter the website and keeps a forever record of all the purchases you’ve made. They correlate this against their database and algorithms offer suggestions.

The same is true when you visit almost any major website and sign-in. These daily conveniences are quite helpful and useful but they do bring forth the startling reality that our expectation of privacy does not equate to reality. You can choose to live “off the grid” but that means you don’t get access to many of the very nice things the grid offers.

Modern society allows us to keep track of vast amounts of information that would otherwise not have been available. This raises privacy concerns. Should the local law-enforcement division be aware of how much bourbon I purchase? Might it be used against me in some criminal case down the road? Might a person with a grudge against me simply broadcast the information far and wide in an attempt to embarrass me?

The answer is yes. Those things might happen. That’s why we have laws against slander and defamation. We have laws to restrain police agencies from harassing citizens.

That’s why Libertarians like myself worry when police and government agencies are given more authority in an effort to “make us safe”. I recently wrote that seizure laws are out of control in this country and that’s just one example of our liberties being eroded under the guise of protection.

One of the things I find most distressing is the absolute willingness, nay eagerness, to take away freedoms from those who support the opposite political party. Be it trying to hold Lois Lerner in contempt of Congress for taking her Constitutionally granted right to avoid self-incrimination or animal lovers using the government to destroy legitimate business.

The people of this country leap up and applaud when the rights of their political foes are stripped and, because we live in a Representative Republic, the politicians are quick to follow suit.

As far as I’m concerned; your rights are my rights. It’s just as important now as it was two-hundred and twenty-six years ago.