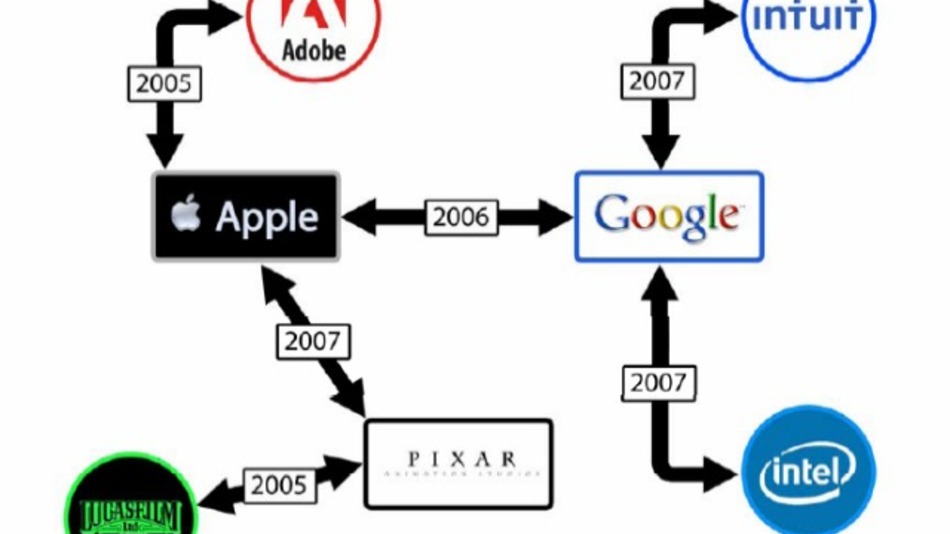 An extremely interesting anti-trust case was just settled by Apple, Google, Intel, and Adobe for about $300 million. It’s a case that will have serious repercussions throughout the industry and I’m of the opinion that the resolution is just. There are those that will argue the companies got off lightly and others that the employees got too much compensation.

Let’s examine the situation. With the advent of the information age and the coming of the automation age there was and will continue to be a huge need for a highly educated workforce. The best and brightest workers are in high demand and will be increasingly so in the future. I spoke about the need for an educated workforce in this blog.

As the need for sophisticated workers increases so does the value of the workers who meet the requirements. Employers must then pay these employees increasingly large sums for their services. This is good and natural and everything that we Libertarians expect from a capitalistic system.

In this case the major players including those who just settled but also including Pixar, Lucasfilms, and Intel, who admitted guilt earlier, agreed not to try to hire top talent away from each other. There is a trail of emails that make it clear this was happening. Steve Jobs of Apple was particularly aggressive to the point of writing threatening emails to competitors. At least two of these, Sheryl Sandberg of Facebook and Edward Colligan of Palm told Jobs to stick it where the sun doesn’t shine, or used words to those effect. Good for them!

The collusion of the companies in the lawsuit is undeniable. The question is whether or not the technical employees were allowed to sue as a group. There are a number of legal hurdles that might have derailed the case on appeals. On the other hand, the guilt of the companies in denying their employees a fair opportunity to shop their worth is undeniable and the series of emails and likely testimony from the likes of Sandberg and Colligan made a much, much larger resolution possible. The lawsuit cited a figure of $3 billion which could have tripled to $9 billion.

Therefore I think the final outcome is just. The employees were certainly not recompensed the value of their services during the years of collusion but it is likely they could have gotten nothing at all and, even worse, the companies exonerated for their vile, anti-capitalistic behavior.

This resolution makes it clear that workers are absolutely entitled to the whatever wage anyone is willing to pay them. That companies cannot collude in this fashion because it undermines the entire capitalistic system. Employees benefit greatly as do companies like Facebook and Palm who agree to honor the tenants of capitalism.

This case is an excellent example to my fundamental Libertarian friends that a completely laissez-faire attitude from government towards business is naive and dangerous to the people and to liberty as a whole.

As a Libertarian I am neither pro-business nor am I pro-worker. I want everyone and every business to succeed on their or its merits. Capitalism is an excellent system but some government regulation is required to make sure it doesn’t become corrupted by anti-trust activities.

The resolution arrived at in this case is the sort that serves capitalism, serves business, serves workers, and in the long run, serves us all.