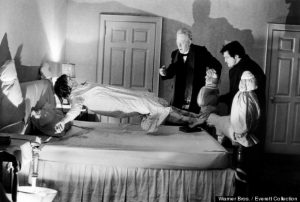 Cases of people asking for demons to be expelled in rights of Exorcism are rising rapidly in at least Italy if not elsewhere in the world and the Catholic Church is responding by holding a conference on the subject. The church hopes to train more priests capable of properly performing the exorcism. There are apparently many young priests who find the entire process questionable and refuse to take part. Good for them.

I’ll be honest right out of the gate, I’m an Atheist. Just as there is no god there are no demons. What people consider demonic possession is generally one of two things. It is mental illness or someone who has done something horrible and is unwilling to accept the consequences of their actions. According to the church, if someone is possessed by a demon they are not responsible for their actions. It’s a good thing our legal system is absolutely not based on the Judeo/Christian religious teachings. Can you imagine if it was? Would any Christian ever be guilty of anything, ever again? It’s a free pass.

The Old Testament is pretty much devoid of anything resembling a demonic possession although there is a very questionable incident that depends on a favorable translation to fit even remotely into the idea. Exorcism is almost entirely based on scripture that references first Jesus and then his disciples casting out demons with a simple command.
If Jesus could do such a thing it must mean that demons do exist. If demons exist then they must be able to take possession of a person and force them to do things they would otherwise not do. It seems clear to me that people are capable of the most vile and disgusting acts of inhumanity without any supernatural intervention whatsoever. There is also plenty of evidence of mental illness which, until quite recently, was treated in horrific ways.

The issue that presents itself is people are increasingly of the opinion they are possessed by demons. The church and its priests must deal with this phenomenon. It is absolutely real to them and to be treated in the same way any other problem is handled. If a person has a cold, treat it. If a person is possessed by demons, treat it.
There is a list of supposed symptoms that the afflicted will sometimes display if it is a demonic possession rather than mental illness or a simple ruse, but there little or no ability to distinguish between them.

My problem with all of this is twofold. Believe what you will. That’s religious freedom. But when mentally ill or criminally irresponsible people are being treated for exorcism; it means they are not being treated for their real problems. That makes me both sad and angry.

I’m not foolish enough to think that I can change anyone’s mind on this issue. Either you believe demonic possession is possible and can be treated with an exorcism or you think it is complete nonsense. I’m just sad and angry.