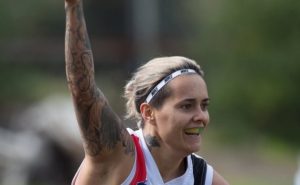 I’m fairly certain that most of my readers are aware that I love sports. I fell in love with Australian Rules football a few years back when it was broadcast on ESPN3. I still follow the sport and something happened this weekend that makes me think. Two players in the game, one a man and one a woman, were caught speeding.

If you say big deal then it’s likely you are much like me and completely inured to sports stars behaving badly here in the United States. In Australia it’s a big story. Both players are facing serious trouble and potential suspensions. The teams are issuing strong words about expecting better from their players, how they take road safety quite seriously.

There is all sorts of chatter on the Collingwood Facebook page about the incident.

It’s not easy to compare a country with a smaller population like Australia to a large one like the United States where we have far more sports stars in a wider variety of sports. The reaction in Australia to the incident, which would probably not even rise to the level of an actual news story in the United States, does raise an interesting question.

Do Australians hold athletes to a higher standard than we do here in the United States?

I certainly think the population of the two nations has something to do with it but perhaps there are cultural differences to account for as well. In Australia police are given wide latitude in interdictions on traffic violations. In Australia the police can stop you while driving at any time for no reason and check for intoxication or pretty much anything else, they have no Fourth Amendment restrictions.

Is this good? Bad? Does it effect how things like speeding are viewed by the general populace?

I’m not really sure I have any world altering conclusion here but I do find the entire thing quite interesting.

I’m a big fan of the Fourth Amendment. I think allow government officials to stop people for no reason is an extremely bad idea. I’m also not a huge fan of vilifying people for relatively minor transgressions. Who among us hasn’t driven faster than the speed limit?

What do you think? Is the culture for sports stars too forgiving in the United States? Too harsh in Australia? Somewhere in between?