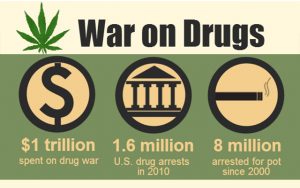 “You can’t sue somebody for a drug debt. The only way to get your money is through strong-arm tactics, and violence tends to follow that.”

That is the quote from the Attorney General of the United States in regards to marijuana legalization. What else is there to say? How stupid is he? Or does he just think those who support him are stupid?

Police officers die. Innocents die. Drug dealers die. Drug users die. The violence is almost completely centered on the enforcement of drug laws. If drugs were legal there would not be anywhere near the violence. Do we see violence around prescription drug debt? No? Gosh, a shocker there.

Of course if drugs were legal the police forces of the United States wouldn’t have nearly as much to do. Nearly as much to spend on neat equipment. Not nearly as many citizens to bully and attack. Of course, on the plus side, they would also be much safer. They could focus their energies on non-drug crime and helping the citizens of their communities rather than financing their entire department off the misery of said citizens.

If drugs were legal the prisons would lose most of their inhabitants. That’s a good thing? Right? Well good for everyone except the prison system which enriches itself on putting citizens in jail.

What would the DEA do if drugs were legal? Well, just about nothing. How much money would that save? But we don’t want that, we want to employ people.