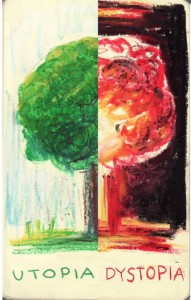 Utopia or Dystopia? That is the question.

I was skimming through various news headlines, as is my daily habit, and felt a familiar sense of bemusement as I noted story after story that seemed to have little relationship with the truth. We now live in a time where information is more freely available than it has ever been. Communication of ideas cannot be suppressed but it can also be channeled in a way never before known in human history.

More people can think and learn independently and at the same time more people can be directly influenced by a set upon story decided by a few people in power. A single narrative broadcast through various outlets and repeated endlessly as truth both loudly and with conviction.

I think this duality brings us, at this moment, closer to both Utopia and Dystopia than ever before.

So the question is whether we are heading toward Men Like Gods or Nineteen Eighty-Four?

Will we grow into a society which believes in privacy, free movement, unlimited knowledge, truthfulness, and free discussion and criticism?

Will fear of such a society inspire those who desire control to create a world of tyranny?

Generally I’m pretty optimistic about this subject. I think people will embrace freedom and those who wish to impose tyranny will never be able to convince the masses otherwise. Still, as I peruse article after article that spouts nonsensical ideas. As I read statements that lack any factual basis from men and women whom I consider to be intelligent; I begin to wonder.

Is it a race? Will one emerge victorious and the other fall by the wayside or is it our lot in life to vacillate between the two ideologies? I do not offer any conclusive answers. These are difficult questions and perhaps they will never be satisfactorily answered.

Here’s what I think.

As individual freedom spreads so also will fear of freedom. I think it is a race. As I, and those like me, demand more privacy and less government those that want to control us will redouble their efforts to suppress us. They will gather their forces and unify their Talking Points. They will promise safety and promulgate fear. Many people will believe anything they are told if it is said often enough and with absolute conviction. Truth can be overcome and lies can win. There is a terrible danger.

Think for yourself. Don’t believe a statement because it matches your ideology. Question. Be skeptical. Demand logic and proof. Examine evidence with an open mind. Go where the facts lead, not where you heart wills.