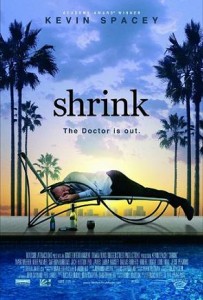 I watched a movie on Hulu last night called Shrink. It was bad. Why it was bad fascinates me.

I’ve argued on a number of occasions about the ideas of Subjective vs Objective thinking and while doing so often make reference to movies. I argue that what makes a movie good or bad is its various parts. The actors, the acting, the screenplay, the cinematography, the directing, and various other factors.

Shrink puts my logic to the test. The movie has a stellar cast who all perform ably enough. It has high production values in every regard. The dialog of the individuals when interacting with one another is largely pretty strong. Yet, it’s awful. It is terrible in the way a bad film is not. A bad film is made up of many bad parts. This is an awful film made from excellent parts. How, how, how?

The score is good but overly repetitive when it comes to what are clearly meant to be scenes that touch our hearts. When the same piano notes again start I found myself cringing. “Oh no, here we go,” I said out loud. Out loud.

The plot relies on coincidence again and again and by the time the Keke Palmer character finds the accidentally dropped script and the Kevin Spacey character wakes up next to his drug dealer in the hospital; I had had enough. “Nooo!” I shouted. “Really?” I said shaking my head.

Dallas Roberts plays an agent and his germ-phobia is ever prevalent when useful and absent when not. In one scene he recoils from a touch and, moments later, grabs the arm of a client and drags him off for a talk. Inconsistencies. Little ones that crop up again and again. Nothing huge. No deal breakers. Just minor flaws adding and adding and then multiplying.

All of the characters are half-explained (at best) and there are too many of them. We learn about them in short bursts that are designed well but just always seem to fall short. The writer clearly understands the idea of showing instead of telling a story but it’s just too little for too many.

I could go on but the conclusion that I’ve finally reached is that an overwhelming number of little flaws destroys the product no matter how great its potential. Perhaps that is why it is so difficult to achieve greatness. It requires both broad strokes of genius and minute attention to detail.

Anyway, I’d avoid Shrink if I were you. Don’t say you weren’t warned.