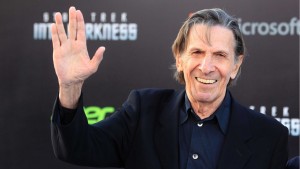 It’s a sad day for me. Leonard Nimoy passed away and with him, to some degree, Mr. Spock.

The reality is that Mr. Spock is not dead for the simple fact that he was never alive. He was simply a character played by Mr. Nimoy who spoke lines and acted from scripts. Yet here I am saying farewell anyway. It is difficult to separate Mr. Spock from Mr. Nimoy. It is not difficult to do the reverse. Mr. Nimoy went on with his own life and accomplished many things.

Mr. Spock may not be dead but my heart is heavy nevertheless. Mr. Spock is now played by Zachary Quinto in the new Star Trek movies. I wish Quinto well, certainly his bravery at taking on such an iconic role is to be admired. That being said, I think I am not alone in thinking of Mr. Spock as the embodiment of the acting talents of Mr. Nimoy.

I watched Star Trek in the reruns in the early 1970’s and he was far and away my favorite character. I myself might well be what they call today a high functioning autistic. The definition is thus:

The manifestations of autism cover a wide spectrum, ranging from individuals with severe impairments—who may be silent, developmentally disabled, and locked into hand flapping and rocking—to high functioning individuals who may have active but distinctly odd social approaches, narrowly focused interests, and verbose, pedantic communication.

Whatever my condition may or may not be there is no doubt that Mr. Spock inspired me. His insistence on logic when those around him were aroused by their passions touched something inside me even in my juvenile years. I loved Mr. Spock. I was furious during the episodes where he was infected by something or another and forced to act illogically or to, horrors of horrors, kiss Nurse Chapel!

I loved his habit of coolly calculating the odds in dangerous situation. I loved his search for the best possible solution to every problem regardless of other factors. He was my hero.

I did not always agree with his logical conclusions. I do not think the needs of the many outweigh the needs of the few. I like to think Mr. Spock would have approved of my disapproval. He was that sort of man … er … Vulcan … er … fictional character.

I’ll finish this post with my favorite Mr. Spock quote of all time. It is certainly not his most famous line but for me it sums up everything. In the heat of battle, in a moment of crisis and emotion, he kept his cool and gave us his logical perspective on the tactical prowess of Khan Noonien Singh.

Captain Kirk was lucky to have such a friend.