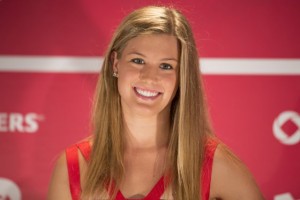 I used to be a huge tennis fan and played in college and high school. I remember with great fondness my many games with friends during that time. I used to follow tennis very closely but I generally only watch the major events these days. Something that is happening in the tennis world today reminded me of the power that so many attribute to the media but in reality belongs to us.

At Wimbledon a rising young star by the name of Eugenia Bouchard got a lot of publicity as she made it all the way to the final match. Bouchard is pleasing to look upon, there were a number of stories written about her, and she quickly became a darling of the media. Just like Tiger Woods this feeding frenzy of stories was not created by the supposed “media” but by the interest of fans in the stories. The more people who read the stories, the more who clicked on links, and the more who commented led to even more stories being written. Greater and greater optimism was expressed about her chances of winning Wimbledon and becoming the next “big name” in tennis.

I wasn’t really aware of all of this until I read the story about her loss in the final. Until I read the comments under the story. In the story itself Bouchard seems very reasonable. After the match, as the roof was being moved into place because of oncoming rain, she was asked to wait in the room where the engraver puts the name of the champion onto the wall. She had to watch while her opponent’s name went up. Here are the quotes:

It was a little odd. I was in the engraver’s room, so I was watching them work, wishing one day, dreaming that he’ll write my name somewhere.

Maybe it’s a bit cruel. She just told me to go in there. I didn’t ask questions. I was in there when I won the juniors. I got to go in the Royal Box, so while waiting, I waited in the engraver’s room, as well. So I had flashbacks to that time.

The comments on the story essentially brutalized Bouchard. Very nasty stuff. I was immediately puzzled because the quotes in the story didn’t match what I was reading in the comments about her “arrogant” and “spoiled” attitude. What’s up?

As I read further in the comments it became clear that most of the people writing negatives things in the story were not responding particularly to this story but their overall perception of Bouchard. They didn’t like all the stories anointing her the next queen of tennis and reveled in the heavy defeat she suffered in the final to the superior Petra Kvitova. They associated the media frenzy over Bouchard with the young woman herself. They blamed her for the plethora of stories and in their minds made her to be selfish, spoiled, and just plain evil.

It’s an interesting situation to me because I so often hear people blame “the media” for fooling people politically or favoring one side or the other side. I’m certainly not saying that there isn’t plenty of bias out there in the media but I am saying we make up our own minds about things. Whatever the media has done to promote or denigrate Bouchard, President Obama, Senator Paul, or any other public figure the reality is that we make up our own minds about them. When we come to erroneous conclusions it is not the fault of the media but our own.

If we choose to have a preconceived notion about a young tennis player and vent our anger and hate then that is what we choose to do. If that hate is completely out-of-line with the story in question then the blame should fall squarely upon our shoulders. If we cannot read the facts of the story and come to rational conclusions then we have failed a test of critical thinking. Each time we fail such a test we hazard making a poor decision. Each poor decision leads to … well you get the point.

Would that everyone was judged by their actual actions. When reading something about a public figure it’s wise to check your preconceived notions at the door. Read the story for the story. Look for biased reported. Check facts. Take the time to look for another point of view. Come to an informed conclusions. And if you still hate Bouchard then so be it. Even if you still hate Bouchard take the time to read this particularly story and her words. Just because you dislike someone in general doesn’t mean everything they say is wrong.

I know it’s easy to rely on what we want to believe. Try not to and you’ll be a better person.